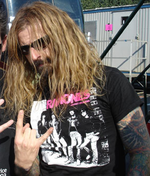 "Truthfully, when you make a new album … you go, 'OK here's eleven new songs, five of which we'll never play live. And here's the two or three singles that will always be in the set. I think they [the record industry] dropped the ball a long time ago and they're never going to recover from it. Nobody wants to actually purchase music any more … it's a weird time because the music scene is alive and well, it's just the music buying public is not… A year from now, I don't even know if they'll be pressing CDs anymore or, if they do, stores won't even bother carrying em."