Next Tuesday, a new crowdsourced music service is launching called Shuffler; it takes blog content and turns the songs into streaming radio stations. Also, the service queues-up the most-recently listed music first and it displays the entire post of origin below the playback controls. As compared to other sites, those that make a song's origins nearly invisible to users, this should make bloggers happy. 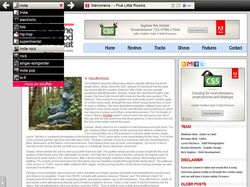 "Shuffler will be free to use for up to 20 songs per channel per month, and the company plans to advertise certain blogs or bands in order to support the free version," Eliot Van Buskirk at Wired reports. "A one-time fee of $9 removes the 20-song-per-channel-per-month limit." To which one Pho-list reader, an influential music and tech industry listserv, commented, "Ha ha!  I love it!  Selling access to free content that people are too lazy to find themselves. Although if I was one of those 1600 bloggers I would be wondering "where's *my* money bitches!"

(source and image via Epicenter)