Whether or not you agree with U2 manager Paul McGuinness's analysis on how to save the music industry might be beside the point, but it does serve as an opening into the discussion of if we really need to "protect" it in the first place. 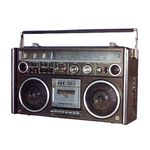 If you're in radio, the current plan seems to be to avoid innovation and creative destruction at all costs by mandating an entire industry that you don't control or have any say over to install FM radio receivers in every single device that they oversee just so you can expand your market share and somehow cushion the blow of all the licensing fees that you have avoided paying for decades. Yet, every single music startup online has been nailed to the wall with such exuberant charges that they can barely afford to keep the monthly Internet and electric bills paid. In an alternative reality, had tech startups been able to circumvent those fees in the way that radio has maybe the social ecology of music culture online would have likely evolved to a point where the idea of listening to two talking boxes blab on about Paris Hilton's latest public screw up between two overly produced songs and three brain-dead commercials about banking and life insurance plans would have lost all public interest by now.

Don't even try to tell me that Pandora and Spotify are the best we can do. While they are amazing and needed services I'm unconvinced that they are the final designation in the evolution of our culture and the means through which fans will interact, discover, consume, and produce music. I haven't the slightest interest in saving radio by having some anti-consumer and government-lobbied FM radio receivers thrown into my phone at the expense of more useful features and the overall cost of the next mobile device I buy. Humor columnist Lore Sjöberg over at Wired has taken to this idea quite well by suggesting that we approach saving other industries with the same nonsensical approach and come up with ways of making sure that other legacy industries never have to adapt to new technological realities then lobby the government to enforce the life-saving mandates. At his best, Sjöberg argues that since the newspapers have had such troubles finding a business model that encourages consumers to pay for their content; they should consider an alternative strategy. Instead of succumbing to the societal and technological shifts that are eroding the profitability of their industry, company executives should lobby and attempt to get a bill passed that mandates Amazon and Apple to bundle a parakeet with every device. "This will create a groundswell of demand for newsprint with which to line the cages of the federally mandated house pets," writes Sjöberg. I don't know if you've ever owned a parakeet, but owning one would at the very least require everyone to get the Sunday edition.

Top Ten Government Mandates Needed To Save Us:

So, how might the record industry follow this insightful example, along with the one set by radio, and create their own anti-consumer countermeasures that would ensure the profitability of the major labels and the industry and greatly inconvenience anyone at the other end of their government-lobbied mandates?