And Incorporates Time Into Music Recommendations. 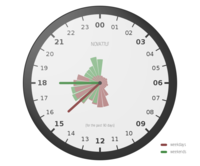 Music recommendation is fairly straightforward, at a time, when our consumption habits clearly aren’t. The general, algorithmic approach takes the stance that users who played a song in accordance with another in high volume will likely enjoy a song that other users have voted as being most-relevant in the progression of the playlist.

Others take song structure and cadence into consideration, while several services attempt to tap the social and human elements of the process, seeking to make their suggestions a little less soulless.  The result is similar, yet gradually diverse evolutions of taste in music. However, we all know that the music that we like isn’t that simple and numbers-orientated.

Adding another facet to music recommendations, the online radio service Last.fm has launched a new data visualization called Listening Clock, which takes into account the quantity and different types of music that you listen to throughout your day. The theory is that certain listeners consume a distinctive variety of music, at different times of the day. Thus, these temporal listening patterns can be used to create a better music recommendation algorithm, one that takes the time of day into consideration. The ultimate goal being to not just suggest the right song, but to be able to queue it up at precisely the right time too.

To make sense of the graphic, the red indicates weekday listening and the green is weekends. The arms on the clock represent the average duration of time that you listen and their length coordinates with how focused your listening is around that time. This is one of many moves among social music discovery services that aim to map songs to how humans actually experience them; it will be interesting to see what’s to come. What other elements, beyond time, do you think should incorporated into music recommendation?