An Audience With An Audience: What Digital Technologies Are Changing About Live Music 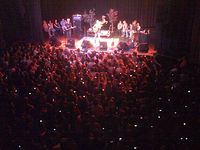 Traditionally, when journalists write about the widening of the digital divide, what they're talking about is the gap between those who have access to digital technologies and those that don't. As a recent article in The Wall Street Journal points out, that's no longer the case. In this context, the rift that they're speaking of relates to the growing disconnect between attendees of live concerts who feel entitled to brandish their cell phones, digital cameras, and, in a rising number of cases, full-blown camcorders and those who think that the very act of doing so defies the purity of the live music experience.

For some, it's the matter of becoming distracted and watching the recording screen of another fan. Others plainly think that it takes away from the tribal aspect of concerts. That by connecting to somewhere else and watching a screen over their heads, these fans are at the venue in body but not in spirit.

This is what some social researchers call "absence-in-presence." Part of the reason that fans feel the need to wield their devices is because it allows them to be with their friends even though they're physically apart. The other is because they've become so used to documenting their experiences. It doesn't matter if the band playing is offering a professional recording of the live show. The attendees want to capture their own experience of the show and share it with their friends.

Whether or not the act of doing so is destroying the essence of the event is up for debate. As an active concertgoer myself, I can't say I've picked sides. Sure, I've always been a minimalist when it comes to attending live shows, but that's me.

Facebook hadn't taken off yet when I first started attending concerts. Therefore, not only was there less of a motive to bring a digital device to a show, but the reasons why people carried them were different. It's one thing to snap a couple pictures with the intent of showing them to a few friends and grabbing a small keepsake. It's quite another to be able to capture the moment and share it with all of your friends, often, in real-time.  The dynamic shifts.  Fans might be the audience of the artist, but the artist isn't the audience of the fans.

In most cases, the pictures and short films get shared on social networks and reach upwards of four hundred. In others, some fans may have their own audience of thousands. And as it also happens, sometimes that short video that a fan recorded has the potential to go viral and reach hundreds of thousands, if not millions of viewers. As John Jurgensen makes apparent in his article, "Acts are all too aware of how their careers can be buoyed or sunk by a critical mass of exclamation-pointed Facebook postings and Twitter links to raw footage."

Now that monetary gains have transferred away from the production of recorded music, in most cases, artists are left to burn up the road in order to make up the difference. It used to be that the live show of an artist could only be seen live or heard through albums. Then, there were professionally captured and released concert films and music videos. But an act could be at their very best and do a number of takes to ensure that the essence of their performance was at its best.

Groups are now charged with the task of being more human than human.  If footage escapes of a bad night on tour, it could sink the interest of fans only a few towns away. Worse still, it could circulate, unbeknownst to the artist, and damage their reputation as performers entirely—for as long as the Internet remembers or until the audience forgets, but they might not.

As social scientists have learned, humans are forgiving of their own shortcomings but fail to acknowledge and give lenience to those that befall others.

Artists are damned if they allow digital devices at shows and can't stand the body motionless, lit-up faces. Since it's so difficult to buck something that isn't so much of a trend as it is the mobile communications revolution taking hold.

Up-and-coming artists likely can't afford to not allow fans to film their shows. These days, you never know who's recording the performance for themselves and who's capable of extending the reach of the group in a single upload.

Thus, more so than established acts, indie artists are damned if they don't let fans use their digital devices. The audience with an audience is challenging the social norms of what is considered to be acceptable behavior at live shows.

A Sea Of Phones, I Mean Fans

In an age where concert tickets tend to be an investment and those who are in the very front row recording tend to be the ones who waited outside for several hours to ensure their optimum placement; it's a hard call.

In my experience, the thought of bringing any kind of digital devices into shows makes me wince. I've witnessed far too many cellphones reduced to not much more than hockey pucks as someone a few rows away is searching the floor, on their hands and knees, in the face of thousands of bodies capable of crushing them, in fear, hoping to find their now long lost device.

To this day, I still leave everything in my car, double-knot my shoes, and drink a Gatorade an hour before. Keeping my shoes on, staying hydrated, and seeing the show—that's my goals. If you want to take the risk and record it too, go for it.

Inspired by: Is Video Killing the Concert Vibe? Lighters held aloft at rock shows have given way to camera phones. Meet the backlash. (WSJ)