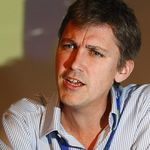 When it comes to ideas, we often give ourselves more credit than we deserve. The time that a lone genius spends 'toiling away' may not be as important as the moment that he went out for coffee and conversed with friends. Ideas are part of larger networks of connections, not the singular trajectory of epiphany.  Though it may seem like we’re struck with that lightning bolt of inspiration—that storm had been brewing the whole time. Sometimes, we try so hard to bring our ideas into fruition that we only obfuscate their insight. Frustrated, we leave our workstations and take a walk.

Then, like a catching a bag of bricks, the true nature of that idea becomes revealed to us. In this TED talk, Steven Berlin Johnson lectures about these things and many others. Researching for his book Where Good Ideas Come From, Johnson wanted to gain a better understanding of the environments that germinate ideas. What Johnson found is that we’re not always as honest about the origin of our ideas as we think we are. Like others, we’d like to believe that our ideas come in flashes of insight, when really, they had been culminating over months and months; it was just a matter of the neural connections in our brains and lives reaching the optimum state of liquidity for the true idea to emerge.

Take a moment to check out this great talk: