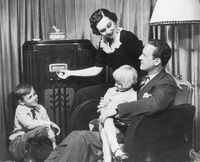 No surprise to anyone, the National Association of Broadcasters still wants government mandated FM tuners to be put in your cell phone. The revelation though is that they are now boasting research poll results that 78% of phone owners would consider paying a one-time fee of 30 cents to gain access to local radio stations through the build-in chip. The top reason: they want to listen to the weather and their local stations on their phone.

As well, 73% said that having a radio forced into their phone that’s capable of providing “local weather and emergency alerts in real-time would be ‘very’ or ‘somewhat’ important.” Aside from my obvious opposition of letting the government design cell phones or giving the radio industry—that proudly claims that it’s audience is growing—any type of free pass that allows it to grow their audience without innovating. I propose instead, as Rob Pegoraro at The Washington Post has, that wireless manufacturers and carriers should return the favor to the NAB. They should commission their own surveys on the number of major issues that radio has. I can already imagine the interesting results: