“Be Ready To Stay Up Late And Have A House Full Of Gear.” – Todd Hansen, Better Than The Van (Pt. 1) 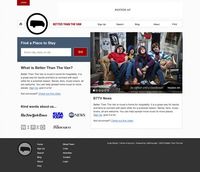 (UPDATED) Recently, I spoke with Todd Hansen, who is co-founder of Better Than The Van, a hospitality service for touring musicians. In part one of this two part interview segment Hansen talks about the economics of an emerging band, how smaller acts will always be more nimble than larger ones, and why being a band is a real business.

How can we make it easier for fans to become active participants in their cultural lives—such as by giving an artist a place to stay—and what barriers need to be lowered in order to make participation possible?

Todd Hansen: In regards to hospitality a big hurdle is the stereotype that all working bands will destroy your place and light your neighbor's house on fire. That’s really not the case. Yes, be ready to stay up late and potentially have a house full of gear. But after that, it’s pretty tame.

How do you overcome some of the social stigmas that surround 'rowdy and destructive musicians' and help fans understand how much of an impact that they're making by lowering lodging costs for musicians?

Todd Hansen: Understanding the economics of being a young/emerging band is the first step. If a band does a 10 day tour, stays in a Motel 6 for 10 nights that’s over $500.  It costs anywhere from $80-90 to fill up a van with gas and that will get you from Minneapolis to Chicago, about a 5 hour drive. Not to mention food, van repairs, gear replacement/maintenance (things always break). So just to get to a show w/ out free lodging will cost a band about $130 at minimum. Putting up a band eliminates about 50% of that cost, and that’s huge.

As for the “social stigma”, that’s been ingrained in the cultural psyche and probably impossible to overcome. I guess people just have to try it out and see that most bands are very appreciative and respectful.

Has the social web has brought forth the opportunity for musicians and fans to become more connected on a deeper level—in a way that empowers smaller more nimble acts over that of established ones?

Todd Hansen: Smaller acts will always be more nimble. They have to be. There are so many tools to use now, so much more than even 5 years ago that allow them to create and sustain a presence.

Take Jeremy Messersmith as an example. I spoke a friend of mine, Paul Gillis who manages Jeremy. It’s just those two working the record, that’s it. It’s a complete DIY effort from recording to promotion to touring. They’ve landed some good syncs on TV shows like Chuck, put out a very cool construction-paper-animated Star Wars video and managed to land on the iTunes charts for a few weeks.

Jeremy makes a huge effort to connect via the social web like doing lunch-time concerts via Ustream from his living room. It’s paid off. This is just one example….there are tons more. In the end it’s about finding way to connect personally and directly with fans. Authenticity goes a long way.

Are we moving towards a more healthy and sustainable social ecology of music culture online, one inhabited by a middle-class of musicians that the listening public can support? Does the middle-class even exist?

Todd Hansen: A band is a business. If it’s not viewed that way, it won’t last. Don’t get me wrong, the song matters. The art is paramount because with out it, you’ve got nothing. But we now have ways for band to directly connect with the public, in real time to promote their record or shows. In the end, it is about trying to scrape together a living. Is it a “middle class”? Possibly. Is it healthy? Definitely. It’s a unique time we are in.