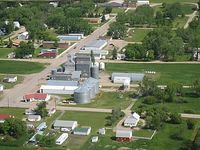 This weekend, I had a chance to make a trip back home. Much of what I believe in doesn't exist there. When I tell people, some of which I've known for my whole life, that I write for a blog on the web and get paid for it, I am greeted with a blank stare. To them, this isn't something that they consider possible. The web is a place where they retrieve emails and weather updates—not a platform for publishing. This isn't what troubles me.

Often, when I am there and see people younger than I am, it makes me wonder, what does music mean to them and how do they relate to artists? In this town, three commercial radio stations exist; country, top 40, and old school to new rock are their formats. The closest place to buy music or see it live is 90 minutes away. This bigger city has a Target, Best Buy, and Wal-Mart. There's another shop, it's like a record store; they sell skate parts, smoking pipes and bongs, and music. Several times a year, very big and established acts tour there. Most acts though, they only route tours through the next town over, which is another 70 minutes down the road. Only there do any local and regional bands play.

As for my hometown and the many that surround it, there are a few music kids, but there is no such thing as a music scene. Most of the schools have music programs like choir and band, but their funding is likely low. These kids, like anywhere else in Middle America, know what file sharing is, they must.

While visiting, I asked myself, do they understand what supporting creativity is and why doing so matters? What argument would sway them from file sharing and convince them to buy music? I ponder these questions, because I think that there are many kids like this, whose roles in music are still largely passive.

The whole MySpace thing happened and more artists reached out directly to their fans, but for them, Taylor Swift speaks to them through magazines and her singles appear on the radio stations. That is the extent to which they are involved in and active in their cultural lives. Course, they all have access to the web.

Any of them who're remotely interested in music and discovering artists will find a way to fulfill that want. But, how does their connection to music differ from someone who grew up in cities like Chicago or Minneapolis—that have thriving local ecologies of music and artists? I'm most curious about these questions.

Because, if the future of music as an industry depends quite a bit on how up-and-coming generations view music and the extent to which they actively desire to support it, then we're talking about much more digital technologies and the set of behaviors they promote. We're talking about cultural awareness and the need to foster it. That doesn't happen through lawsuits and disconnecting people from the web. That kind of change happens in different ways. Likely, the web will evolve past file sharing. However, just because it will, doesn't mean that people will go back to supporting creativity as if nothing ever happened. I'm not quite sure what initiatives would need to be undertaken, but it quite seems foolish to think that shutting LimeWire down will have any impact on much the larger problems.