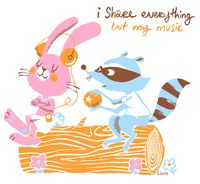 (UPDATED) IRIS Distribution has launched its "I Share Everything But My Music" T-Shirt campaign. Their goal is to promote music ownership and support for the musicians that create it. The logo on the T-Shirt aims to educate kids about music piracy without being heavy-handed. It's a difficult message to communicate. If the point is too aggressive, kids may ignore it. Likewise, if the point is too subtle, it will get lost among them.

Yo Gabba Gabba illustrator and animator Stephan Britt designed the logo. The T-Shirt can be purchased alone, or with the digital albums here.  50% of the profits from these sales will go to support indie label trade group A2IM's efforts.

The campaign is a cutesy way to start the conversation about music piracy with kids. But does the rabbit seem a little conceited?  Does the raccoon resemble a thief? And if that orange is an MP3, the rabbit appears too stuck-up to take it.

In the past, efforts like this to educate youth about music piracy haven't been too effective. Here IRIS is educating kids about music ownership and supporting artists. But are they also telling them that culture isn't meant to be shared?