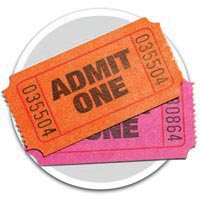 You may not be able to download a concert, but you can stay home instead. That appears to be exactly what people are doing. Why? Many fans pointed out that expensive tickets aren't the only reason why they've hidden their wallets from the "TicketBastard" juggernaut.

Of course, many fans also griped about the additional fees that are tacked onto the cost of a ticket. Some even went as far as citing the 35$ t-shirt, 25$ program, and 8$ beers as being outrageous to the point where they decided to say home where parking is free and beer costs $1.

Others said the live music business is failing to draw in the younger audience.

"There is a real generational shift with regards to concerts," Mike Jones wrote. "The older generation who go to these concerts grew up in an age where the concert experience was a part of life." He worries that the live music business is missing the bigger picture. If teens and twenty-somethings are priced out of the experience early on, they won't establish concert-ticket buying habits. Then, as they grow older and gain a disposable income, they won't go and buy a ticket.

Instead, they'll spend their money on the activities that they enjoyed in the past.

Since a majority of the highest-grossing acts of 2010 are targeted towards wistful adults, hoping to see the performers that they cherished in their youth; it's easy to see Jones's argument. You can't sell someone's youth culture back to them in the form of a +90$ ticket if they don't have any fond memories of concert going to begin with. They never went back then. Why the hell would they tolerate paying expensive fees later? They're more likely to buy a limited edition copy of Call of Duty: Black Ops than a ticket. Their money will go where youth nostalgia lies.

Also, Randy Fann commented, "When the elimination of cigarette smoking in these events went away, so did the marijuana smoking. So did the concertgoer."

He says that it's "easy to spot a joint burning, when no one has a Marlboro lit all around." It's an interesting theory. However, many more mainstream fans would likely say that the prevalence of various kinds of smoke prevented them from attending concerts in the first place. By cleaning up the venues, to the best of their ability, staff hoped to make shows appealing to a much broader audience.

Many more believe that last minute discounting on tickets is angering loyal fans.

Patrick Reagin said that, "the idea that it would ever have been acceptable to charge higher prices to loyal fans and then cut rates right before the show for stragglers" was enough to hamper his ticket buying. To which he adds, "if you've attended a LiveNation show you understand how awful it is to pay high prices for tickets" and "ridiculous rates for concessions." All the while, fans must put up with the JumboTron ads during set breaks. Fans aren't the center focus, he says.