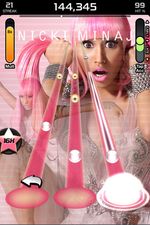 Within 18 hours of its release, Tap Tap Revenge 4 claimed the #1 spot in the App Store. It's seeing around 25,000 downloads per hour. According to Bart Decrem, SVP and General Manager at Disney Mobile, this is the fastest that any of Tapulous's games have hit #1.

Between all of its apps, the company estimates that they're nearing 50 million total downloads. The key to their success has been their ability to send promotions to their existing user base once new developments occur.

Some of the new features in Tap Tap Revenge 4 include support for Apple's Game Center, higher resolution graphics, a stronger social component, and a wider variety of both free and premium music downloads.  This new release comes approximately 6 months after Disney acquired Tapulous for an undisclosed sum.

Synchblog on 12/21/2010 in Uncategorized | Permalink | Comments (0)
Share on:
Top
Follow Us on Daily Summary Subscription
Advertise on Hypebot