It seems 2015 was the year for back catalogs, as a recent study from Nielsen has revealed that albums eighteen months and older outsold new releases, much to the distress of A&R execs everywhere.

According to the latest Nielsen report on the music business of 2015, catalog albums (defined as any album more than 18 months old) outsold newly released albums, which is the first time that's ever happened. That's even despite the huge sales numbers of Adele's 25.

In 2015, catalog albums sold 122.8 million units, while new albums sold 118.5 million, a drop of more than 9% from the previous year. Adele amount for around 7.5 million of those 118.5 million, which means that the figures would have been really lopsided had she waited until this year to release 25. 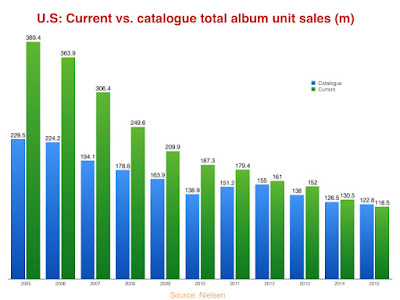 This is actually disturbing in that it means that new music is much less marketable than music of the past, a fact that will have A&R execs cringing in their boots.

It is good news for labels in general though, as they make far more profit from catalog sales than from current releases, since there's no production or marketing expenses involved.

If you really think about it, this really means is that we need a new trend in music, and the sooner the better.