An End To 4 Minute Music Videos: How Record Labels And Artists Can Fix Their YouTube Woes

As the artists vs. YouTube battle rages on, Mark Mulligan suggests that the real underlying issue is that the four minute music video, while it worked well for MTV, is no longer suited to a modern YouTube, and that artists need to begin creating lengthier videos, both to maintain user interest and multiply their ad revenue.

The artist-and-labels-versus-YouTube crisis is going to run and run, even if some form of settlement is actually reached…the divisions and ill feeling run too deep to be fixed solely by a commercial deal. What’s more, a deal with better rates won’t even fix the underlying commercial problems. Music videos under perform on YouTube because they don’t fit YouTube in 2016 in the way they did YouTube in 2010. The 4 minute pop video was a product of the MTV broadcast era and still worked well enough when online video was all about short clips. But the world has moved on, as has short form video (in its new homes Snapchat, Musical.ly and Vine). Short videos are no longer the beating heart of YouTube viewing and quite simply they don’t make the money anymore. This is why music videos represent 30% of YouTube plays but just 12% of YouTube time. If record labels, publishers, performers and songwriters want to make YouTube pay, they need to learn how to play by the new rules. And to do that they need work out what to do with ‘15’. 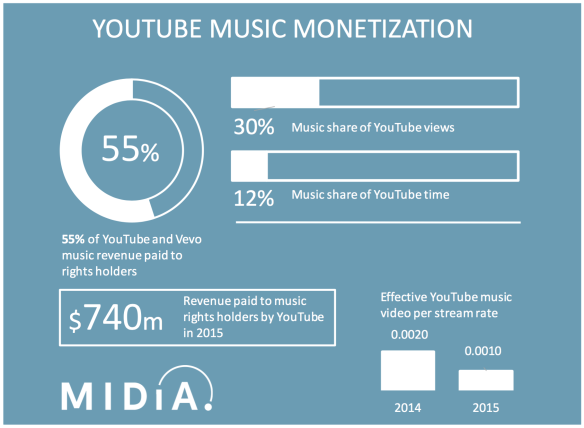 The recorded music industry gets radio, and it is beginning to get streaming. Both are all about plays. Each play has, or should have, an intrinsic value. They are models with some degree of predictability. But YouTube does not work that way, which is why the whole per stream comparison thing just does not add up. In MIDiA’s latest report ‘The State Of The YouTube Music Economy’ we revealed that YouTube’s effective per stream rates (that is rights holder revenue divided by streams) halved from $0.0020 in 2014 to $0.0010 in 2015.

Sounds terrible right? And make no mistake, there is no way to spin it into a good news story. However, it didn’t fall because of some nefarious Google ploy. It fell because of many complex reasons (all of which we explore in the report) but the 2 biggest macro causes were:

This is where the magic number 15 comes in. Right now music video sits in the same 3-4 minute slot it has done so ever since MTV said it wanted videos that length. Yet video consumption is now polarized between the 15 second clip on lip synch apps likeMusical.ly and Dubsmash and 15 minute YouTuber clips. Falling in between these two ends is revenue no-mans land. As I have written about before, labels and publishers need to figure out how to harness the 15 second clip as an entirely new creative construct and shake off any old world concepts that this is actually anything about marketing and discovery. It is consumption, plain and simple…it just happens to look unlike anything we’ve seen before.

At the opposite end of the 15 scale labels and artists need to start thinking about what 15 minute formats they can make. Think of this as a blank canvas – the possibilities are limitless. For example:

15 Minutes Does Not Have To Break The Bank

And before you cry out ‘but this stuff will cost so much more to make’, it doesn’t have to if more is made out of current assets and processes. For example, ensure that one of the support crew has a handheld camera to film some shoulder footage for reportage. The whole thing about YouTube is that it doesn’t have to be super high production quality, in fact the stuff that does best patently isn’t. YouTube videos that work best are those that are an antidote to the old world of inaccessible glamour. If you really want to do things on the cheap, simply splice three music videos together into a single long form video (e.g. tag 2 older tracks onto the new single). Doing so will nearly triple the video ad income.

And before you think this isn’t what audiences want, ask Apple about ‘The 1989 World Tour LIVE’ and Tidal about ‘Lemonade’.

And (yes another ‘and’) if you can’t get your head around the inescapable need for a completely new music video construct, just think about it this way: 15 minute videos will make you 5 times more video ad revenue. This really is a ‘no brainer’.

Back To The Future

As a final piece of evidence (not that it is needed), cast your mind all the way back to 1982, to Michael Jackson’s landmark video ‘Thriller’. A 13:42 video that is widely recognized as one of the all time music video greats that has also racked up 330 million views on Vevo. So you could say the case for 15 minute video was already made a quarter of a century ago (thanks to MIDiA’s Paid Content Analyst Zach Fuller for pointing that one out).

For more detail on our ‘State Of The YouTube Music Economy’ report check out our blog.