Yet another victim in the seemly endless stream of bogus takedowns off of YouTube percipitated by a major label (this time Universal Music Group), the band The Dandy Warhols recently had the video for their single yanked from YouTube.

We're constantly hearing about bogus takedowns thanks to bogus copyright claims, some more amusing than others. Last week we had Ariana Grande's benefit concert in Manchester getting blocked by ContentID, despite being on her own channel. And now (via Sarah Jeong) we've got the band the Dandy Warhols rightfully complaining on Twitter that the video for the single "You Are Killing Me" off of their 2016 album has been blocked on YouTube via a copyright claim from Universal Music Group. Here's their tweet:

And here's what I see on YouTube as I write this post (one hopes that sometime soon the video will be returned): 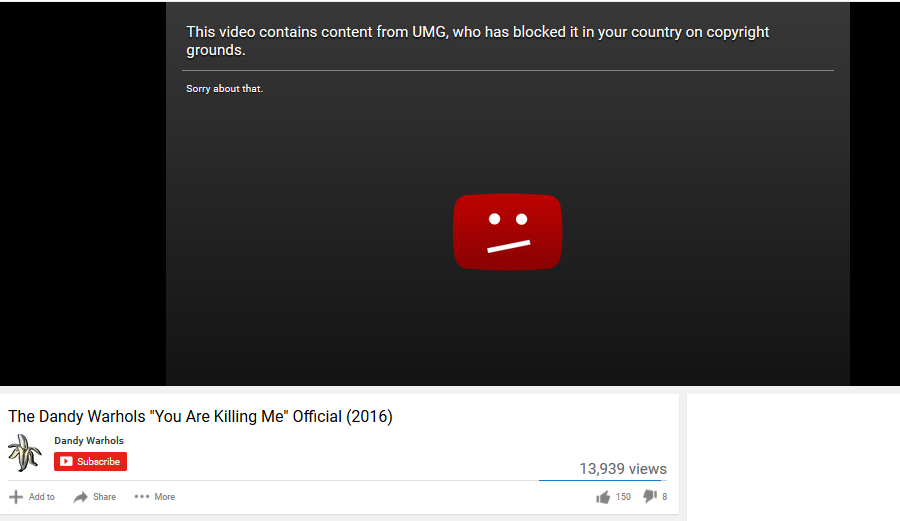 In case you're wondering, no, the Dandy Warhols are not on Universal Music. They're on an indie label, Dine Alone Records (hence the reference in the tweet). The band used to be on Capitol Records, which is now a part of Universal, but left Capitol back in 2008, when it was still a part of EMI (before Universal bought EMI). And, either way, as far as I can tell, the song "You Are Killing Me" is a new song from 2016, which Universal Music would have no legitimate copyright claim over.

Yes, this is obviously some sort of mistake, and I'm sure that eventually (if it hasn't already happened by the time you read this), YouTube will put the video back up. It probably won't happen, but maybe Universal Music and/or YouTube will apologize (wouldn't that be something?). But everyone else will just shrug their shoulders and move on. But this is a real problem, and should be a very big concern. That's because right now, around the world, lobbyists and friends of Universal Music and its friends are pushing to make their own powers to not just take down videos and audio much, much stronger, but they also want the power to block any re-uploads once stuff is taken down. Thus, if Universal Music (or anyone else) decided to (say) completely silence an independent band, it could do so, across multiple platforms for quite some time, potentially causing all sorts of problems, without any judicial review. That should be seen as a major problem, and should be a reason why those laws are not expanded.