The State of Unclaimed U.S. Music Royalties and Licenses 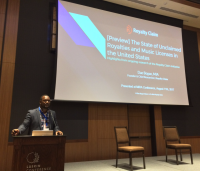 Here we share a presentation by Royalty Claim's founder Dae Bogan at the recent MIRA Conference where he offered a preview of Royalty Claim's currently in progress State of Unclaimed Royalties and Music Licenses in the United States to an audience of music industry executives as well as economists, sociologists, and researchers from around the world.

Royalty Claim attended the Music Industry Research Association‘s first inaugural MIRA Conference at the UCLA Luskin Conference Center this week. Royalty Claim’s Founder and Chief Researcher, Dae Bogan, MIA, had the honor of presenting a preview of our in-progress The State of Unclaimed Royalties and Music Licenses in the United States report before an audience of economists, sociologists, and researchers from universities and institutions from around the world, as well as music industry executives representing firms such as Nielsen, Pandora, Universal Music Group, and Warner Music Entertainment.

For the first time, updated statistics regarding the filing of “address unknown” Section 115 NOIs on the US Copyright Office during the first half of 2017 was revealed. Insights included an overview of the organizations that have utilized the procedure, including Amazon, Google, Spotify, iHeart Communications, and Microsoft. However, those large music users were expected. Interesting inclusions to the list were The Recording Academy and the Christian music service, TheOverflow and interesting omissions from the list are platforms that boast millions of tracks — Apple and Tidal — but may not be reaching every independent rightsowner that may have compositions available on those platforms.

‍The presentation also discussed the nature and causes of so-called “Black Box royalties”. A black box is an escrow fund in which music royalties are held due to an organization’s inability to attribute the royalties earned to the appropriate payee. Examples were given, including unattributed advances from DSPs to music companies, the US’s limitations on sound recording rights, and other issues.

The presentation concluded with a video demo of the Royalty Claim Platform, which received positive reviews from conference attendees. The full presentation is  here.