Here Chris Castle explores the concept of moral rights, statutory rights put in place to safeguard the link between an artist in their work, as well as bemoaning the lack of these same rights in the US and how the should operate in conjunction with companies like Facebook and YouTube.

I was honored last year to have been asked to participate in a symposium on moral rights co-sponsored by the U.S. Copyright Office and the Center for the Protection of Intellectual Property at the George Mason University School of Law.  The symposium relates to the Copyright Office Study on the Moral Rights of Attribution and Integrity.

Moral rights is a key area of the law of copyright that is sadly lacking in the United States and an important legal tool to protect the rights of artists.

Moral rights (or for the fancy people, droit moral) are largely statutory rights that maintain and protect the connection between an author and their work.  (As I highlighted in Artist Rights are Human Rights, moral rights are not economic rights like copyright, but transcend those rights.  This is why you see language in the human rights documents, like the Universal Declaration of Human Rights, that essentially track the moral rights language.)

The two principal moral rights are the right of integrity and the right of attribution (which conversely includes protection from misattribution).  These are recognized in the Berne Convention (Article 6bis for those reading along).  Others that are not mentioned in Berne include the right of first publication (which the U.S. has a version of in the “first use” doctrine for songs under compulsory license) and withdrawal–which is a bit reminiscent of the more recent right to be forgotten.

When it comes to attribution, or what we might think of as credit, there is a form of imperfect social contract between record companies, film studios and television produces with the creative community.  This is largely thanks to years of collective bargaining with guilds such as the Writers Guild, SAG-AFTRA and the Directors Guild as anyone who has been to a Writers Guild credit arbitration can attest.  It is unlikely that any of these would trade on a creators name.

The place where we have problems, of course, is with the New Boss companies like YouTube, Google and Facebook.  These companies don’t just trade on your name, they SELL your name as an advertising keyword thus associating the artist’s name with products, works or services without the artist’s knowledge, albeit somewhat in the background.

Try boosting a post on Facebook and selecting the attributes of the audience you want to reach.  Type in the names of 5 popular artist and I feel certain that you will find them all there. 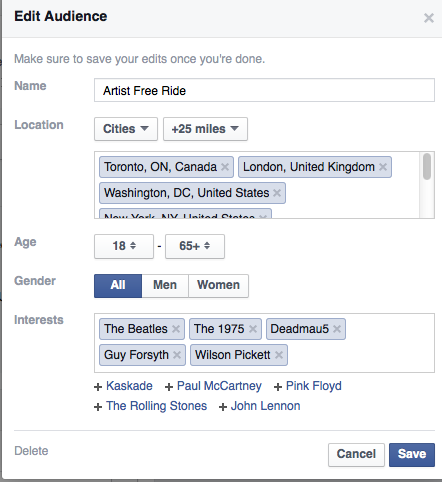 We also have confirmation of this business practice from the Luke Sample affidavit in a piracy case against Google where Google executives advised Sample how to maximize traffic through Google Adwords to push Sample’s pirate site:

If the U.S. expands its moral rights “patchwork”, it is likely that these business practices could come under a microscope as violations of moral rights.