Music Pirates Have A Special Place In Hell… Or Not 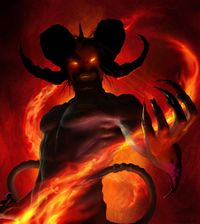 In case you haven’t heard yet, if you’re a fan of the UK group Elbow and have file-shared their music—at a time when you had the money to rightfully pay for it—then, you’re “going to hell.”  Now, I don’t care how common the phrasing is. If there’s anyone that can be left out of the file-sharing arguments, it’s God. What, ‘thou shalt not steal?’ Is that where Mr. Guy Garvey wants to take what could've otherwise been intelligent discussion? Garvey should know better.

Besides, if you follow the headlines, “the percentage of Americans affiliating with no religion has climbed from 8% in 1990, to 15% to 2008.” Then again, I guess you don’t have to actually believe there’s a Hell to be sent there. Though I’d hope that no one is being booted out of Heaven for being fifteen and having a passion for music. Wait, under his logic—that’s fine. I presume most college students, whom are broke and eating noodles in a cup get a pass too. So, what about poor musicians whom file-share the music of other rich musicians? If two poor musicians file-share music from each other, do they cancel each other out?

These are important questions. Because, if we’re going to go around and running our mouths about damnation, we ought to be more specific about it. Course, Garvey did say that file-sharers have their own rooms reserved for them in Hell. Aren’t those reserved for, I don’t know, terrorists? Does Garvey think that the crimes of file-sharers are on a scale with those whom have actually hurt people? So, if I understand this right, rapists and murders=file-sharers. That’s ridiculous.

Right?  But, that’s the point here; it is ridiculous to speculate in that manner and so are the assertions that Garvey makes.  Condemning fans to Hell avoids the more meaningful conversation of why are fans downloading your music—that they could’ve otherwise paid for? Is Garvey connecting with fans and giving them any reasons to buy his music? Moreover, is he offering it to them in the ways in which they’d prefer to consume it? Sadly, Garvey’s proclamation sounds more like a cry for press than of a true affirmation. It’s just maddening to me—that he thinks file-sharers have a special place in Hell. Guy Garvey of Elbow to Newsbeat:

“If you genuinely can't afford music then of course you're going to rip it. If you can afford it and you don't pay for it then you're going to hell and you've got your own room. Especially when it's a smaller band. There's no excuse."