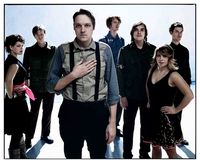 In early August, Arcade Fire was profiled in The New Yorker by Sasha Frere-Jones. Some argued that the piece was against major labels, because Arcade Fire existed mostly outside their walls.  Others though that it dispelled the myth of the DIY artist, as  the group wasn’t truly doing it by themselves; they had assistance and licensed their music to Merge. In a recent interview with Pitchfork, writer Ryan Dombal asked the group about this—what was ‘their take’ on that?

"Major labels just lost their way. It's like the housing bubble. They lost a sense of the fundamentals. They were just… throwing money around. They weren't thinking about putting out good music or embracing new things."

"When we were getting courted in the early days of Funeral, we would get taken to these dinners, and it was just like, 'We'll take the dinner, but who's paying for this?' I guess Led Zeppelin is… It's such a weird thing."

The group has also been catching up on their reading:

"[Major labels would] probably be doing fine without the Internet. The way they handled the Internet was just boneheaded… I just read Greg Kot's book about downloading, Ripped, and they were not smart." Read the rest.

Has Led Zeppelin or Britney Spears ever bought you dinner?