How Garth Brooks Harms Music Incomes Of Others 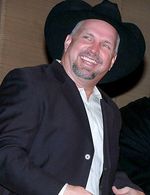 The Copyright Alliance pointed me to a letter that musician Monisa Angell wrote the Obama Administration. If you want to see the arguments in the music industry painted in black and white. Her note is certainly the black. She raises the question, "Can we afford to have a country where the creator has no value?" Well, no. Creators are valuable, as are their creative works, given the optimum market conditions. No one has ever contested that. Most worrisome is the tone she strikes. At the very least, the mental leaps made. Let's just blame Comcast, Apple, and Sprint for making music piracy kits; they empower their users to "steal from the creative class of this nation."

Yes. It's the fault of Comcast for allowing users to download creative works using their net connection. It's the fault of Apple letting users load any file to their iPods. Worse still, software programmers are creating the clients that facilitate this behavior, making it blatantly easy for users to acquire creative works without paying for them. So, we need to turn ISP's into piracy police, push Apple to lockdown their media devices, and better yet, take the web from something that enables unplanned and unforeseen innovation and turn it into an iPhone.

That way, all sites that are marked as infringing in nature, such as the Pirate Bay, can be kicked out of web — like the app store — in a matter of seconds.

Why? Angell argues, "The royalty funds which literally provide for my livelihood are endangered as traditional music business models fail." So, the traditional way of doing things should be preserved, to ensure the flow of music royalties and the rest of this net and tech nonsense should be laid to waste. Anything that is challenging the income of Angell should be stopped, stalled, and banned.

No other reasons for the failure of the traditional models are presented. This music piracy problem could be buttoned up and solved tomorrow if the Obama Administration only followed Angell's line of thinking. Interestingly enough, she cites that a "virtual tsunami" has hit the creative industries head-on, causing many to "believe that content (music, books, movies, etc) should be free."

Unfortunately, the publishing industry would be greatly disappointed by the end result of the suggestions made by Angell, because technological innovations didn't teach readers that books are free or that authors shouldn't be compensated for their creative works. In fact, two of the most common ways that readers get books today, as reported by James McQuivey at Forrester Research, is by borrowing them from a friend or getting them from the library. "Evidently content — at least in the book business," McQuivey says, "is already quite free, even without the help of digital." Thus, banishing the web and the technology companies that homestead it wouldn't do much good. It would do nothing to change the perceptions of readers that already get books for free without paying.

As legal scholar Larry Lessig suggests in his book Free Culture, our focus should not be on finding ways to break the Internet. Instead, our focus should be on making sure that artists are paid, Lessig argues, "while protecting the space for innovation and creativity that the Internet is." Angell doesn't want that. The future she appears to favor is any one that ensures that she is compensated for her music and now. It doesn't matter what elements of the web we lose on the way.

Finally, it's worth noting that one of the most prominent music figures that Angell has recorded with is Garth Brooks. Now, given that I grew up in the country, I happen to like some of his songs and understand why he's popular. Yet, you have to ask, why would anyone pirate the works of Mr. Brooks? Well, because fans can only buy his albums in full — disc and all — and after a preliminary check, it appears that his music isn't available on Rdio or MOG either. Since Angell recorded with Brooks and, as she stated, she depends on these royalties, it seems as if she can't blame Apple's iPod wholeheartedly for her situation.

The "traditional music business model" is failing, sure, but Brooks has failed to embrace the new one. Thus, the reason why fans are file-sharing his works has more to do with the fact that he has chosen to offer them in a format that fans don't want and has neglected to make them available on legal streaming sites. In doing so, Brooks has inadvertently created a situation where fans are file-sharing his works and Angell isn't getting her money. Yet, rather than acknowledging this oversight and telling Brooks to get with the times, Angell blames everyone else for her situation and wants to wreck the web to correct it. One hopes that if the Obama Administration reads her opinions, they take them with a grain of salt.

After all, despite how big of a pirate Steve Jobs is, selling those storage lockers for stolen music, he's more than willing to sell Garth Brooks singles on iTunes.