Why You Should Start Using Flattr

This guest essay is written by Robbert van Ooijen. He recently studied online music and music piracy at the master level at New Media & Digital Culture at the Dutch University of Utrecht. Van Ooijen also blogs at HaveYouHeard.It. 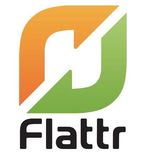 Last December I integrated the micropayment tool Flattr into my blog, Have You Heard It ,and started with tipping other people who had integrated the tool into their website as well. Since then, I became a big fan of the Sweden-based service and see a bright future for the platform, if it’s used by many others too. Therefore in this post: Why I use Flattr and why you should consider doing this too.

Flattr is a service that was founded by Peter Sunde, one of the co-founders of The Pirate Bay. The service launched in closed Beta in February 2010, opened up in summer 2010 and as for now anyone can open up an account. The problem that the service solves is that it makes it easy for you to reward content producers for something you liked. As a Flattr user you pay a fixed monthly fee, the height of which you can decide for yourself. You then browse the web just as you would do normally but now when you encounter something you really like, you Flattr this by clicking a button similar to the omnipresent tweetbutton. At the end of the month your monthly fee is divided among the people you Flattred.

Flattr came to my attention in early 2010 when the service launched in closed Beta. The concept grabbed my attention and although the platform went public last summer, it wasn’t until December that I saw Flattr-buttons appearing on some sites and decided to subscribe, donate and start Flattring myself. Since then, I’m regularly tipping other for the content they produced and shared with the world and I received some Flattrs myself as well, though I will probably only be able to buy a beer from this revenue myself.

There are several reasons why I think Flattr is an interesting service. The first is that it pays attention to today’s trends and user habits. I like to reward people for what they did, and already did so by Digging content or sharing it with others via Twitter or Facebook. Flattr uses this notion and integrates it in a micropayment tool which makes it possible for me to give micro-donations to anyone and anything that has integrated the service.

The second thing I like about it is that the user gets to decide what something is worth and can choose how much he wants to spend on microdonations a month. For most people integrating this tool into their websites it won’t make them rich but just as small online gifts were essential to the Obama campaign in 2008, the micropayments could add up for those who write an insightful blogpost, bring interesting news, make great music, shoot great pictures or have a great online service.

Next to the aforementioned arguments, Flattr also emerges in an interesting era when financial services are getting involved in privacy, press-freedom and file-sharing issue. Early December Visa, MasterCard, and PayPal already closed the accounts of Wikileaks to prevent them from receiving gifts. Later that month the RIAA and MPAA were reportedly trying to get credit card companies to cut off revenue streams from file sharing sites such as MegaUpload. Looking at the political ideologies of Flattr’s founder, cutting off revenue streams is something that the service probably won’t do. So if you’re looking for a financial system that doesn’t intervene between you and an organization that you’d like to support, Flattr might be something for you too.

The Future Of Flattr

Finally, Flattr paves the road to a new way of thinking about disclosing content and receiving money for it without a middle man intervening. In a talk at the re:publica convention last year, Sunde already gave some options for implementing Flattr in the future. The system could allow people to Flattr comments, could be integrated in music players so an artist gets Flattred everytime a song is played, or could be integrated offline in museums next to paintings. It’s one of the ways that the future of giving and earning money could look like, both on- and offline. But it’ll only work out if more people start using it.

So, are you Flattred yet?