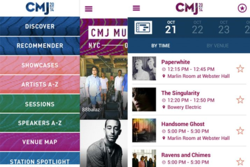 After 34 years of telling the world who is next to make it big and being ahead of the curve, the CMJ Music Marathon is taking a few cues from some of the more famous festivals of the world by focusing efforts on social. The legendary industry event recently unveiled their first ever app, with the aim being to make navigating the enormous festival just a bit easier.

For an app—especially one focused solely on one five-day event in one city—it does a lot. There are five important sections of the CMJ 2014 app, each with it’s own purpose:

The first two options on the menu—“Discover” and “Recommender” are ultimately for fun. CMJ is all about discovering new music, so it makes sense that not only would the designers include these tabs, but that they would put them first. While “Discover” simple gives you a sample of artists to try at random, the “Recommender” plugs into both Facebook and looks at who you’ve already favorited on the app to suggest other artists you’d likely enjoy.

The second, pink tabs are what help you really set your concert schedule. The “Showcases” and “Artists A-Z” sections are pretty similar, in that they organize the artists playing in a way that will help you go through and decide who you’re going to see. I personally have been going through the “A-Z” list in an attempt to sample every artist, but it may be better for you to only look at days and times when you’re free, which is what “Showcases” is for.

While most people come for the music, CMJ also has a healthy lineup of panels and speakers from every corner of the industry. The app breaks it down by both what the sessions are about (you’ll have to choose between “Smart Touring” and “Social Activism In The Music Community”), and the speakers, listed from A-Z. Thankfully, there aren’t nearly as many panels as there are showcases.

A venue map may seem like an unnecessary item, but not when you consider the sheer size of the Music Marathon. By my count, there are some 45 venues in Manhattan alone—Brooklyn is different story altogether. It’s also important to remember that not every CMJ event is at the Bowery Ballroom or Pianos. There are quite a few parties and the like at spaces that aren’t typically used for shows, and finding them can sometimes be tricky.

The last section gets into what CMJ is all about when not in Marathon mode: the business of college radio. This section lets you sample some of the best college stations in the country, playing what they’re playing (theoretically—mine couldn’t quite make it to the playing music part). There is also a “News” tab that connects you to the latest articles from the outlet, including interviews, recent show reviews, and industry news.

Out of all the festivals you may go to in any given year, CMJ is probably the most hectic. Between running around New York City, trying to pack as many meetings and drinks into five days as possible, and attempting to actually see bands, there’s no room for scheduling errors and lost pieces of paper. The CMJ app makes all of this much easier…as long as you can keep your phone alive.