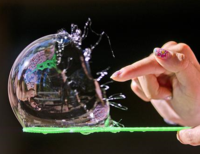 That tech people and music people live inside rarified bubbles should come as a surprise to absolutely no one. If you’ve ever set foot in Silicon Valley, or Brooklyn, or Silver Lake, you know just what I’m talking about — young, over-educated people jabbering on about a hot new app or band

Guest Post by Cortney Harding on This Week In Music Tech

When they leave that bubble, it’s usually to marvel at how gosh-darn quaint everything is — “look, Tim, a phone that’s not a smart phone.” “Wow, Betty, compact discs. I thought these things disappeared ten years ago!”

I get it, and I’m as guilty as anyone. I’m in India right now (and I promise this won’t be another “white person goes to India and has feels” post) and on the way here, Air France lost my bag. A conveyer belt broke in Paris, and it took three days for my stuff to finally get to me. Meanwhile, I was waiting on hold and posting tweets that took hours to answer. Ten years ago, I probably could have shrugged all this off. Now, I was furious. The last time I was in California, I rode in a car THAT DROVE ITSELF. You’re telling me a conveyor belt broke and that was what screwed everything up so royally? Really?

And that’s light years ahead of India, which is great in many ways but somehow hasn’t figured out that roads should maybe have lanes and they’re not appropriate places for cows, humans, and dogs to wander around. I know I sound like an awful spoiled Western brat, but after coming close to death by bull-hitting-car, it’s a little hard not to be a tiny bit critical.

I mention all this because we, as music tech people, need to stop and recognize that we’re way, way ahead of everyone else (or behind, if you’re one of those people). A buddy of mine shared some work he’d done recently with me, and he found that huge numbers of people still listen to terrestrial radio. Still! With the annoying ads and silly DJs and ten song playlists, people still listen. There are times when I feel like a manic cult leader repping streaming music apps — a better way is possible! You don’t have to live like this! You can’t possibly enjoy hearing that jewelry store ad again, can you?

But I guess people…do. The vast majority of the world is OK with stupid ads on the radio, with equipment that breaks and takes ages to fix, with driving next to cows. Every so often, though, something breaks through this and a new technology does really change the game. Netflix is an example of this; Uber (for better or worse) is another. But so far nothing in music has come close. Spotify has come close, but so far the only market it has managed to conquer is the Nordics — great, but not representative of the wider world. The biggest problem facing music startups right now is not artist payouts, or label deals — it’s the fact that they are just too damn insular. I’ve been to many streaming service offices, and most people there are under forty and live in major cities. Spotify has hundreds of people in NYC but as far as I know, only one person in Nashville. The might have campus reps at more rural schools, but those kids only focus on converting other students, not the townies.

I originally had high hopes for Beats to crack the mainstream, because their marketing played so close to the center. They had football stars and Ellen DeGeneres on their side; how better to hit middle America? Alas, they also had a too-clever-by-half product and quickly disappeared into Apple-land — it remains to be seen what their new iteration will look like, and what sort of traction it’ll get. Every other company reeks of cool, which is fine if all you want to capture is that market, but I’m guessing they want bigger things.

It all comes down to this — was the lack of on-demand streaming music really that big of a problem for most people? For people like me, it was huge, and I’d be really bummed if it went away. But for most people, who still listen to the radio and have maybe shifted to Pandora…maybe it wasn’t a big deal. Maybe streaming services are solving a problem where there wasn’t one to begin with.

This gets back to my central point — we all need to start getting outside the bubble more. It can help us manage expectations (or make us more driven to solve problems) and it should help shape our thinking when it comes to the problems we actually need to solve. There’s of course the Steve Jobs and Henry Ford school of thought that customers aren’t smart enough to know what they want and need to be told what they need, but I don’t think works most of the time.

All I know is this — despite everything, the world is still moving really slowly. Ubiquitous wi-fi service is still a fantasy (at least, it’s my fantasy). There are no apps to track lost luggage and airlines can and will just disconnect your calls and ignore your tweets. People still shrug and listen to the morning zoo. Those of us who want to solve this would do well to realize that we’ve got the bring the rest of the pack with us, and find a way to communicate openly with them and show them a better way is possible. Otherwise we risk staying in our bubbles, on the grid and yet fully disconnected from reality.