Often criticized for its failure to make money for rights holders, Spotify's average rate per play continues to decline, calling into question, yet again, the viability of the freemium model of music streaming.

Down, down, down it goes, where it stops nobody knows… The monthly average rate per play on Spotify is currently .00408 for master rights holders. 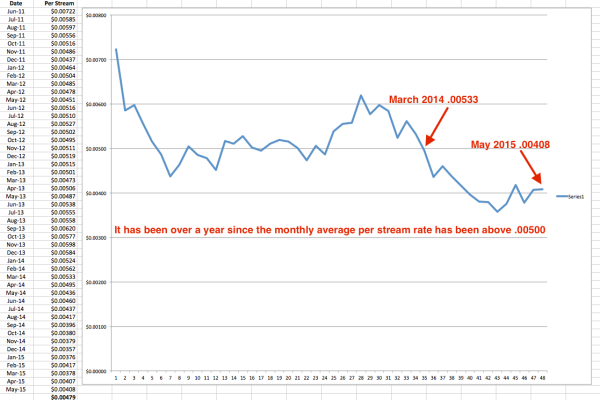 Spotify rates per spin appear to have peaked and are now on a steady decline over time.

Per stream rates are dropping because the amount of revenue is not keeping pace with the  number of streams. There are several possible causes:

1) Advertising rates are falling as more “supply” (the number of streams) come on line and the market saturates.

This confirms our long held suspicion that as a flat price “freemium” subscription service  scales the price per stream will drop.  As the service reaches “scale” the pool of streaming revenue becomes a fixed amount.  The pie can’t get any larger and adding more streams only cuts the pie into smaller pieces!

The data above is aggregated. In all cases the total amount of revenue is divided by the total number of the streams per service  (ex: $4,080 / 1,000,000 = .00408 per stream). Multiple tiers and pricing structures are all summed together and divided to create an averaged, single rate per play.