A new Twitter-themed video for "Smells Like Teen Spirit," a song which has a historically been ripe for parody, was recently shared on Twitter and met with a very warm reception. It didn't take long, however, for UMG to block access to the video, a decision which may have been as detrimental to UMG as anyone else involved.

In checking out the YouTube account of the guy who created it, Jim Mortleman, a more recent video posted just a few days ago popped up, entitled Nerdpunna – Smells Like Tweet Spirit. This was the same style video, using Twitter usernames to create an absolutely hilarious version of the famous Nirvana song. It was so well done (perhaps because Kurt Cobain's lyrics are so unintelligible) that I couldn't believe it had only around 2,000 views. So I tweeted it, joking that people should check it out before it got taken down. A bunch of people started retweeting and linking to it, with many of them commenting on how great the video was or how funny it was. Even people who aren't Nirvana fans were talking about it. A few examples: And there were many more like that. In short: the damn thing is really funny and super well done. After realizing that his video was suddenly getting an influx of traffic, the creator of it, Jim Mortleman (who says that the videos are actually a group project in finding the profiles, which he then puts together in the video) tweeted me that he was pretty sure he was safe because he'd been alerted that UMG was "monetizing" his video — which is one of the options in YouTube for copyright holders if they want to make money on someone using their work, rather than taking it down.

From his YouTube screen, it actually showed that Universal Music had blocked the video in one country while monetizing it elsewhere: 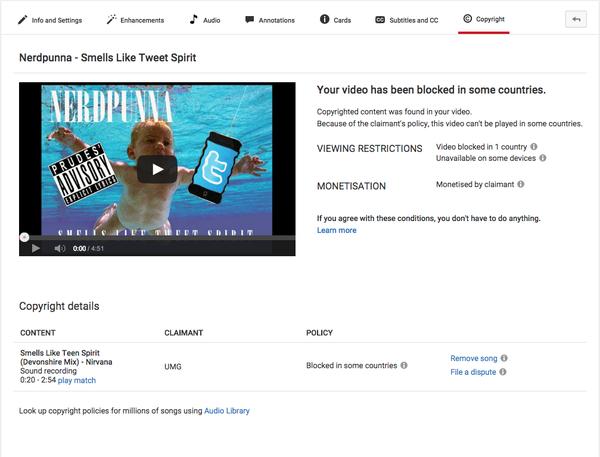 However, just a few hours later, as the video started getting more and more attention, views and tweets… apparently Universal changed its mind — and if you now visit the page, this is what you see: 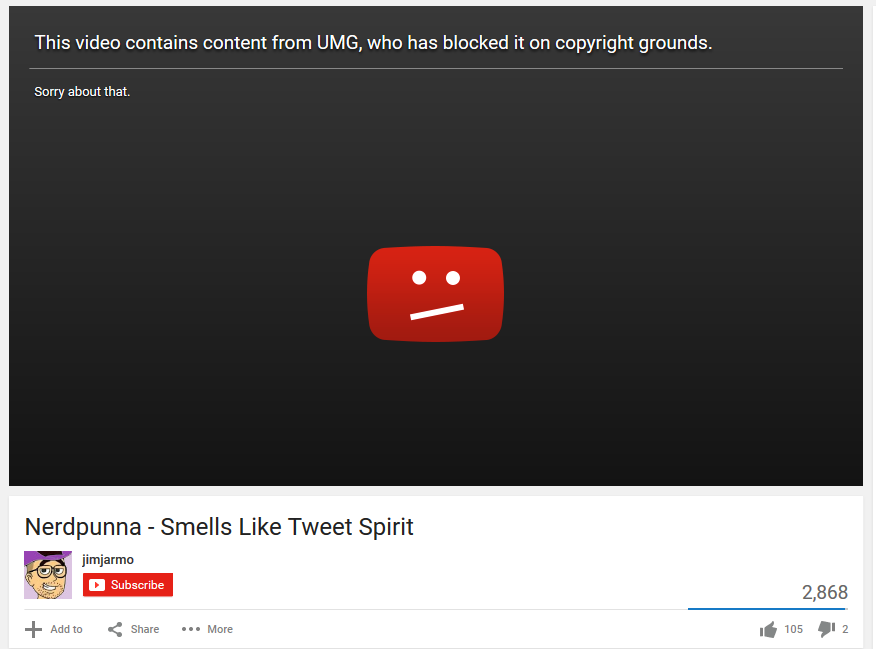 Mortleman says that within YouTube it's now officially blocked in all countries. This is a ContentID match, rather than a direct takedown, though the company clearly made the decision to switch it from monetizing it to taking it down — so someone made a decision.

And it's a hellishly stupid decision. The video was fantastic and didn't take anything away from the song. It certainly wasn't a replacement for the song and, if anything, was likely to draw a lot more interest to the song and remind people of its existence. I'm not a huge fan of the song, but have been humming it to myself all afternoon because of that video (which I ended up watching a few times).

Also, this seems like a pretty clear case of fair use — though I imagine some will disagree. The hilarious use of twitter user names to create alternative lyrics to the song is quite transformative. No one was watching this video as a replacement for the original song, but because the video itself sort of celebrated the song with alternative lyrics made up entirely of Twitter profile names where "Here we are now, entertain us" because "Huey Long Gnarl Emma Talus" (if you haven't seen the actual video… it's much funnier in the way it was presented). And now it's all gone and you can't see it.

All because of copyright law and UMG's total lack of a sense of humor.

Even if you think the fair use case is bunk and that the video is infringing and UMG is totally, 100% in the right to do what it did, I'm curious how this helps UMG in any way, shape or form. It doesn't help them get any more money, and it just makes people pissed off. How is that a smart business decision?

Update: Jim has now posted a silent version of the video so you can see what it looks like, though it's really not the same effect (though you can try to line up the audio with it to try to replicate the effect):