Do Messaging Apps Foretell The End Of Music Streaming Services? 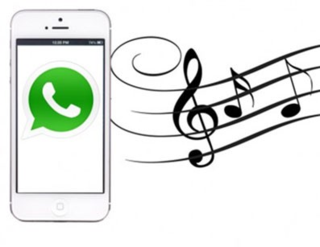 With the rise of apps such as WhatsApp, many people are moving away from larger public social networks in favor of smaller group and one-on-one messaging services. This raises some interesting questions about how people's listening habits will be affected if they also begin sharing music in this more isolated manner.

If you have any spare time this week, it’s worth spending some of it digging through Michael Wolf’s massive tech industry prediction deck. There’s a ton of stuff to comb through and play with, but one of the most interesting things I saw was the astronomical rise of messaging apps, specifically WhatsApp. That one-to-one or small group communication is taking off is an interesting counterpoint to the services that encourage users to share their thoughts and images with the entire world. It’s also worth considering how the rise of messaging apps will impact how we share and consume music in the future.

There are a handful of music messaging apps, including Music Messenger, which raised $30 million before being pulled from the Apple and Android app stores (womp womp). There’s also Rithm, MSTY, and Ditty, all of which have users, but none of them seem to have exploded. Given the way things are going, it probably won’t be too long until one of these services, or something similar, starts blowing up. The question then becomes: what does it look like when people start consuming music one-to-one, or in small groups, rather than on big library-style platforms?

Plenty of music consumption already happens privately, of course — another slide in the deck outlines how people spend time consuming music, and three of the biggest activities include working out, commuting, and doing chores, all activities where you’re likely to have headphones in. Spotify also allows users to send tracks to other users within the service, but both users have to also be Spotify users, which leaves many out in the cold. But there has always been a central place for consuming music, whether it was the record store, iTunes, or a streaming service — a place where listening to tracks was the central focus. What if messaging services started integrating music so that it could be sent to a friend and consumed within the app as easily as a photo or a bit of text?

First off, a whole new way of tracking music and distributing royalties would have to be established. Apps would have to do deals with catalog owners, and those deals would have to be pretty comprehensive — but then how would they monetize? Would users have to watch an ad before each track, which is probably one of the faster ways to turn people off? Could users upload their own content, and then use that to skirt ads? How could the messaging app differentiate between me sending a song I wrote on my guitar to a few pals for feedback and me sending a friend a Beatles track that I ripped and renamed?

Second, if we were to start using this as the basis for charts, the way we think about popular music would change. Part of the narrative of a chart-topping song, especially something that people think of as “the song of the summer,” is that it seems to be everywhere, and you see people consuming it everywhere. This has certainly shifted in the days since the record store, where people would line up at midnight to buy new albums, but even signing in to Spotify or Apple Music now gets you some sort of home screen with real estate set aside for popular music. If people were just trading things in messages all the time, would the charts have any meaning? I suppose it could be useful to know if a certain song was sent back and forth more than another, but that seems a little pointless. Then again, given the fracas over Drake not making it to number one this week despite having one of the most talked about (and memed) tracks right now, they might be on their way out anyway. And third, what in the world would this decentralized system look like for marketers? On one hand, this could truly democratize music — if people love your song and want to pass it around, they could do that, regardless of whether you’re a pop star or a bedroom artist with no budget. On the other hand — how would people even know about your music? If everything is being passed from friend to friend via back channels, where you do even begin to start selling?

Even if this world doesn’t come to pass, answering the third set of questions might bring us to another prediction — the rise of the micro-influencer. At this point, many macro influencers are pretty much shills and everyone knows it. On one level, it doesn’t matter — people responded to commercials full well knowing it was a paid endorsement deal, and that the celeb in question probably didn’t care about the product in question, they just wanted a check. But social influencers try to sell their authenticity; otherwise, we’d have no reason to care. But people are catching on, and this is where micro-influencers come in. Maybe one day you’ll be able to pitch a product to the most popular kids in high schools in a certain city — no one kid will likely ever make enough to be a full time influencer, but you’ll be able to precisely target who you want to reach.

I don’t think Spotify and company have anything to worry about right now, at least when it comes to competition from messaging apps. And there might continue to be a desire for a central place dedicated to just consuming music for a good while. But we’re moving towards an all-inclusive content stream at some point, probably powered by messaging apps. It would be a good move to start thinking ahead.