Is Narcissism Ruining the Live Experience? 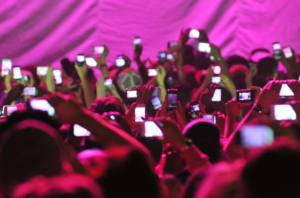 Alicia Keys recently joined the likes of Dave Chappelle, Chris Rock, Guns N’ Roses and many more who want you off your phone at their events by turning to Silicon Valley startup Yondr – a company dedicated to creating "phone-free spaces" at concerts, events and other places. They're not alone, as more musicians and entertainers are speaking out at the interference phones are presenting at live shows. What's really going on here? Can it be argued that rampant narcissism at live events is getting out of hand these days?

There seems to be a divide in the debate – especially on the consumer level, as many advocate their phone is how they capture memories for an archive of special moments for later reflection. However, most aren’t reflecting on those moments at all. Let’s face it, a large number of those phones are being used to broadcast the egos of their users onto social media for instant gratification and virtual pats on the back.

There’s a well-known term in social psychology called BIRGing: Basking in Reflected Glory. The textbook definition of BIRGing is a self-serving cognition whereby an individual associates himself or herself with another successful individual such that another’s success becomes their own. One of the more fascinating components of BIRGing is that the simple affiliation to another’s success is enough to stimulate self-glory. The person engaging in BIRGing does not even need to have been personally involved in the successful action with which they are affiliating themselves.

Go to any show and you’re bound to see BIRGing run rampant, with bright screens illuminating dark spaces designed to remove attendees from the outside world into the artist’s world – all in the true hopes of boosting the ego and self-esteem of the user.

The live music experience is inherently about being present; about fully absorbing that moment in time and allowing it to be etched in your memory forever.

When did it become all about getting the Snap?

When you’re more focused on being the best cameraman you can be to ensure your followers can recognize how cool you are, you miss out entirely on the emotional connection that live music gives you. Live music is about escapism, about being vulnerable, being real. It’s about entering the mind and world of the artist that has chosen to put themselves on a pedestal for your interpretation and entertainment.

A common argument to this notion is that when an artist performs, “it’s their job” and attendees “have the right to do what they want” at concerts.

This is entirely short sighted.

Live performance artists rely heavily on energy and feedback from the crowd to fuel their shows so that it becomes a dialogue between them and their audience. I can easily understand the frustration of those entertainers mentioned earlier after putting in countless hours into their craft, only to be used as an ego boost for their attendees. Live broadcasting and Snapping stories the whole time puts the focus on yourself, making it about you and your desire to be noticed.

However, some artists like Radiohead are actually encouraging phones in the air with initiatives like live Periscopes. Frankly, I'm not sure if this is motivated by a desire to empower fans and have them become engaged in the show in a new way, or simply a case of "if you can't beat 'em, join 'em." Either way, it's certainly a marketing tactic aimed at raising awareness.

On the flip side, there are artists like Jack White – one of the more outspoken people for phones being away at concerts. He once took the stage and said to the crowd, “In case you didn’t notice from behind your three inch screen, there is a huge show happening right in front of you.”

Can't empathize with him? Take this analogy for example:

Imagine spending your entire life searching the world for special, secret ingredients. Then imagine being given the opportunity to prepare a meal using those ingredients for someone you really care about, creating a special ambiance and setting to go with it. Finally, imagine serving that meal with absolute care and deliberation. You go to sit down and break bread with this person, only to witness them taking selfies throughout the meal.

As a technologist, I completely understand and value what live broadcasting and social sharing bring to our culture. However as a musician, I also understand the value of undivided attention in a live setting. Ultimately, it comes down to respect. You’ve entered the artist’s world – get a few pictures if you must, but put your phone away for the majority of the show and try losing yourself.

Social media gratification pales in comparison to the experience and memories you’ll walk away with by absorbing the moment and letting it take over your essence.

What do YOU think? Do you agree or disagree? Let me know in the comments below!