This Song Belongs To You And Me: Lawsuit Filed Declaring Guthrie’s Classic In Public Domain

Owing to a hefty stack of evidence clearly indicating that the song belongs in the public domain, members of the band Satorii are taking the alleged copyright holders of "This Land" to court to prove so once and for all.

American folk hero Woody Guthrie famously put the following anti-copyright notices on one of his records once:

This song is Copyrighted in U.S., under Seal of Copyright # 154085, for a period of 28 years, and anybody caught singin it without our permission, will be mighty good friends of ourn, cause we don’t give a dern. Publish it. Write it. Sing it. Swing to it. Yodel it. We wrote it, that’s all we wanted to do

And yet, his most famous song, "This Land," keeps coming up in copyright disputes. Over a decade ago, we wrote about how the organizations claiming to hold the copyright on that song went after the company JibJab, which had made a clear parody of the song during the 2004 Presidential election. In that case, once the EFF got involved, the case was settled out of court. But as EFF noted back in 2004, part of the reason for the settlement was pretty clear evidence that "This Land" was absolutely in the public domain:

Fact #1: Guthrie wrote the song in 1940. At that time, the term of copyright was 28 years, renewable once for an additional 28 years. Under the relevant law, the copyright term for a song begins when the song is published as sheet music (just performing it is not enough to trigger the clock).

Fact #2: A search of Copyright Office records shows that the copyright wasn't registered until 1956, and Ludlow filed for a renewal in 1984.

Fact #3: Thanks to tips provided by musicologists who heard about this story, we discovered that Guthrie published and sold the sheet music for "This Land Is Your Land" in a pamphlet in 1945. An original copy of this mimeograph was located for us by generous volunteers who visited the Library of Congress in Washington, DC. For those who are not able to visit the Woody Guthrie Manuscript Collection at the American Folklife Archives, we've posted a copy of the document.

This means that the copyright in the song expired in 1973, 28 years after Guthrie published the sheet music. Ludlow's attempted renewal in 1984 was 11 years tardy, which means the classic Guthrie song is in the public domain.

Not much more had come of this until a few weeks ago when some musicians in the band Satorii decided to take the claimed copyright holders to court, asking for declaratory judgment that the song is in the public domain — while also asking that license fees paid in the past get returned. The two defendants? The Richmond Organization and Ludlow Music. If those names sound familiar, they're the same two organizations at the receiving end of a very similar case over the song "We Shall Overcome."

The filing in this case repeats the arguments that EFF made 12 years ago almost verbatim.

Guthrie published the Song in 1945 with a proper copyright notice, which created a federal copyright in the Song. The copyright to the 1945 publication was not renewed. As a result, the copyright expired after 28 years, and the Song fell into the public domain in 1973.

Despite Guthrie’s 1945 publication of the Song, Defendant Ludlow purportedly copyrighted the Song in 1956. Based on that 1956 copyright, Defendant Ludlow has wrongfully and unlawfully insisted it owns the copyright to This Land, together with the exclusive right to control the Song’s reproduction, distribution, and public performances pursuant to federal copyright law.

For example, on July 23, 2004, Defendant Ludlow’s counsel wrote to counsel for Jib Jab Media, Inc. (“Jib Jab”), regarding Jib Jab’s use of the Song. In that letter, Defendant Ludlow’s counsel asserted that “Ludlow is the exclusive copyright owner of the classic folk song ‘This Land is Your Land’ written by the well-known folk artist Woody Guthrie.” The letter also asserted that Jib Jab’s use of the Song’s melody and “the well-known lyrics ‘This land is your land, this land is my land’ and ‘From California to the New York Island’” infringed Ludlow’s copyright.

Irrefutable documentary evidence shows that Defendants own no valid copyright related to This Land. The popular verses of the Song were first published in 1945, and the copyright in those verses ended no later than 1973 (if not earlier). Defendants never owned a valid copyright to the Song’s pre-existing melody.

The filing includes a copy of the 1945 publication of a version of the song: 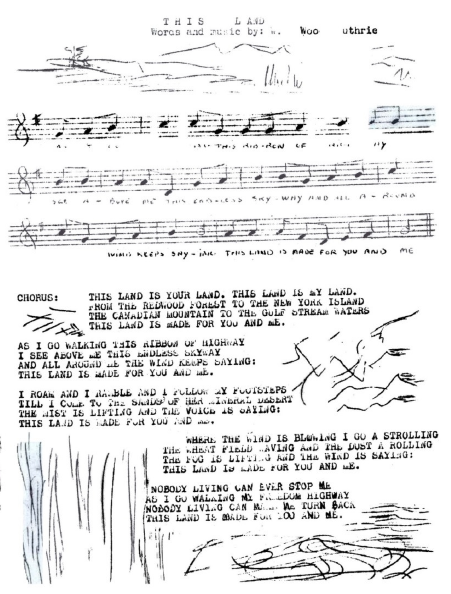 The filing notes that the melody pre-existed "This Land" and was used in a variety of earlier songs, and thus he has no copyright in the melody — even though Ludlow claimed (falsely) in its 1956 copyright registration that Guthrie wrote the music (it also failed to note that the song had been published multiple times earlier). Amusingly, of course, in noting the lyrics to "This Land," it's noted that part of one version of the song mocks the idea of private property:

Was a high wall there that tried to stop me
A sign was painted said: Private Property,
But on the back side it didn’t say nothing –
This land was made for you and me.