In the latest from the Zappa family's ongoing legal squabbles of the trademark/copyright ownership of the late great Frank, it seems Dweezil has escalated things somewhat, renaming his tour '50 Years of Frank: Dweezil Zappa Plays Whatever the F@%k He Wants – The Cease and Desist Tour'

Oh boy. A few weeks back, we wrote about the absolutely ridiculous story in which the four children of Frank Zappa appear to be fighting over the Zappa name. The story is somewhat complex and involved and is actually somewhat more nuanced than the unfortunately-all-too-typical "heirs of famous artist fight over splitting up the proceeds of that artist's legacy." In that original article, we noted that the dispute seemed to focus on two specific claims: first that the Zappa Family Trust (run by Ahmet and Diva, but to which all four children are beneficiaries) had a trademark on the tour name "Zappa Plays Zappa," under which Dweezil Zappa had toured for years. After some fairly public back and forth online, it became clear that there was an underlying dispute that had simmered for years here: Frank's wife Gail, who had controlled the ZFT, had trademarked Zappa Plays Zappa and charged Dweezil to use it, but had (according to Dweezil) then reneged on an agreement to share the proceeds from merchandise sales. Ahmet insisted that he'd allow Dweezil to continue to use the name for just $1, but it didn't seem that there was any interest in clearing up the older dispute about merch sales, or to allow Dweezil to get some of the proceeds from ongoing merch sales.

The trademark claim seemed… at least possible, though there were arguments for either side, including a fairly strong one that Dweezil had every right to use that name without needing to license it. But the really ridiculous claim was that the family trust could stop Dweezil from playing Frank Zappa's songs. The ZFT had a convoluted — and simply wrong — interpretation of copyright law, to argue that Section 115 of the Copyright Act doesn't apply to Frank Zappa's music, because it's part of a "dramatic work." This is basically a nonstarter and would almost certainly be laughed out of court if it ever got there. Such a theory would basically upend decades upon decades of rather settled law concerning the ability to perform cover songs.

But, now it appears that the Zappa Family Trust also has some ridiculously nutty trademark theories as well. That's because to avoid the trademark issue, Dweezil originally changed the tour name to "Dweezil Zappa Plays Frank Zappa." Not nearly as catchy, as everyone agrees, but functional. Apparently, Ahmet and the ZFT lawyers sent a laughably wrong cease and desist letter to Dweezil claiming that merely using the name Zappa was trademark infringement:

This week, a lawyer for the trust informed Dweezil’s lawyer that the name Dweezil Zappa Plays Frank Zappa infringed on the trust’s trademarks of the terms “Zappa” and “Frank Zappa.”

This is just wrong. In the response from Dweezil's lawyers, they pointed out that this was nominative fair use: "the use of 'Frank Zappa' merely serves to accurately describe the nature of the show and is in no way misleading or defamatory." Since no one's published the full letters — just snippets — I don't know why they mention defamation in there, but that's a whole different legal minefield.

Either way, to avoid having to deal with that threat, Dweezil has changed the name of the tour yet again so that it's now: 50 Years of Frank: Dweezil Zappa Plays Whatever the F@%k He Wants – The Cease and Desist Tour. Really. 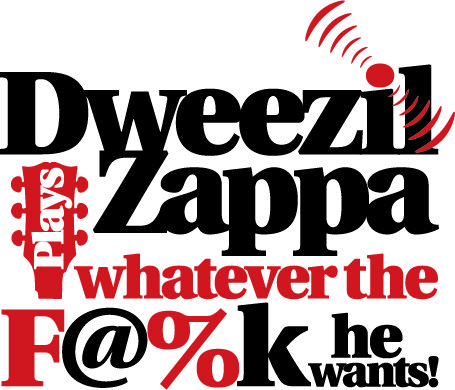 Dweezil also notes that "Yes there will be CEASE AND DESIST 2016 tour shirts" on the tour (along with additional merchandise unrelated to the Zappa Family Trust). I will say that as a legal nerd, I really, really want a Dweezil Zappa t-shirt that says "cease and desist" if anyone happens to be going to one of the shows (unfortunately, the tour isn't coming anywhere near me, though it is playing the town I grew up in — but I doubt I can convince my parents to go). If anyone is going to one of the shows and feels like hooking me up with a t-shirt, contact me please.

In the end, this whole thing, like so many intellectual property debates, seems almost entirely pointless. Intellectual property just becomes something that people fight over because they can, and it makes it difficult for people to step back and take a look at the bigger picture to recognize just how stupid the whole thing looks. It's hard to think of any sane or logical reason why Dweezil shouldn't be able to go out on tour as Zappa Plays Zappa. The idea that trademark should get involved in any of this would only make sense in the most ridiculous of trademark scenarios — one where greed seems to be leading over basic common sense.