Topspin's Jim Wallis talks with Matt and Ollie Jacob, brothers and co-founders of London-based indie label Memphis Industries about running a label and how direct-to-fan plays work as an aspect of their business model.

Memphis Industries is a London-based independent record label, formed in 1998 by brothers Matt and Ollie Jacob. The label is home to Field Music, The Go! Team, Poliça, Haley Bonar and many more: you can download a free sampler from their website at Memphis-Industries.com. We caught up with Ollie over coffee on Pentonville Road in London and asked him a few questions about running a label and the role direct-to-fan plays.

What have been some of the most effective direct-to-fan campaigns you’ve done over the years?

In 2012, for Field Music, we compiled their cover versions on a CD called “Field Music Play…”. We sold it only through their website, we sold it reasonably cheap because there were no recording costs, also offered it bundled with tickets- and I think we sold something like 1100. We could have done a lot more. It midweeked in the top 75 and you can see, then, that you’ve got this very powerful tool that you’re using every time. So, when we were coming in to the campaign for their new album, or when they’re doing their side projects, you’ve got a really powerful tool to just go- right, put something interesting in front of these people and they’re there, they’re ready for it. And largely it’s worked.

That’s been the most coherent and successful D2C that we’ve done- Field Music- as a kind of longstanding project, building it up and getting fans. Saying- this is going to be worthwhile being part of this mailing list, because you’re going to know about stuff and there is going to be stuff on their website that is very particularly directed at you and special for you. For the new album we did a signed print and a specific coloured vinyl, and that really works. And it helps when a band engages with you as a label on that score. We manage Field Music too, which makes it very easy.

And what are some of the problems you face in that respect as a label?

When we’ve got an artist signed for the world, the D2C makes sense and it works well. When it’s run from another country, and we’re not in charge of it, then it’s never going to be as good for our territory. It works best for us when we’re in charge. Of course it does.

The other thing, in general, is building the mailing list: one of the issues we’re facing is that building that mailing list is becoming a tricky proposition. Email is still the most effective way to communicate though. It’s the one where you just go ‘send’…and then there are the orders. It’s just tangible.

It’s always struck me that one of the dilemmas for an independent label in relation to direct-to-fan is the importance of independent record shops for a release. If you have some extra content alongside an album, say, you might give that as an exclusive bonus to someone like Rough Trade, rather than doing something direct-to-fan, because it may help secure good promotional placements for the release and help build the relationship for the label.

That’s something we’re very conscious of, when we’re putting a plan together- you’ve got to give the indies something. Sometimes it feels a bit like you’re doing the old multi-formatting of a single, very old fashioned- you know, there’s an orange vinyl over there for the indies, there’s our coloured vinyl for our D2C, that indie we’re going to give something special to in stores. If you give Rough Trade a bonus CD, why aren’t the other indies getting it? Why should it be Rough Trade? So, you have to be thoughtful when you’re approaching these things and put yourselves in other people’s shoes. It’s obviously great for us to be sitting there trying to sell several hundred, more if we put our back into it, direct-to-fan- but you don’t want to do that at the expense of the artist and the label’s relationship with the indies, because that is crucial long-term. For a new band, it’s much more important at that stage that the indies are behind it and supporting it. Getting that balance right is one of the crucial things. You have to make sure that you’re not pissing anyone off, really!

Just get people’s addresses! Then go round and thank them individually. It’s a very interesting point. Streaming services have obviously got the data and we don’t. At the moment, we can have 1 or 2 million streams of a track in Germany, but you have no dialogue with those people, you don’t know how to get to them. You announce some shows…and hope that they find out. How do you get to them- that’s the really difficult part now.

Downloads are definitely very hard now. I think this might be the first time, looking at our income on a weekly basis, where that’s coming from streaming to a large degree now. Streaming is working to a certain degree though- you can see when services are putting it in their playlists that it’s working- and occasionally that does in fact drive downloads as well, which is astonishing.

Do you get the sense that you’ve got fans who are fans of the label itself and buy a lot of what you put out? Is that something you try to cultivate?

In terms of our label identity, we do occasional nights- we did two nights at Oslo in Hackney at the end of last year…The Go! Team, Dutch Uncles, both sold out…you can’t argue with it really. Marvellous. A good time was had by all. We gave a poster away on the night. We’ve got so many artists, we could do more parties and nights. We should do more of that. We’re just lazy! No, there are definitely people who get our stuff. I know there are, because I know who they are. I know all of them. And one of them isn’t my mum.

That’s one of the things I enjoy with Topspin is messing around with those kind of things. It doesn’t interfere with anything else. You just go- we’ve got that stock there. Or, if you’ve got 5 or 6 releases in a year, just do a bundle for the whole lot at a cheaper price. 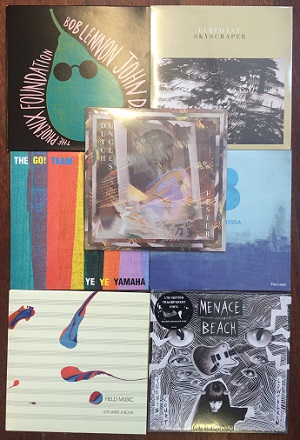 How do you discover new artists for the label?

A variety of ways. There is the completely random email (info@memphis-industries.com). We have signed people that way. There’s obviously just looking at what’s going on, on the internet. That makes it quite easy. Blogs, or happening to hear something on a Spotify playlist, then finding out more about them. Still one of the big things is recommendations from our existing artists that we’re working with. There’s been a lot of that. And people we work with, like pluggers. That kind of thing. One thing we don’t do a lot of actually is trawling around venues seeing bands live. Is there a band we’ve signed by seeing them live and going “that’s amazing”? Probably not. It’s important later in the process though.

Finally, what advice would you give to someone starting out as an artist or in a band?

I always think the key thing is to have a very strong sense of your own aesthetic. If you don’t get that first bit right- imagining what you look like to other people, what your record might look like to people, and how that marries up to the music that you’re making- if that doesn’t have some kind of linear path through it it that is fairly obvious, in terms of being a coherent, linear presentation, that makes it that much harder for everyone else to grasp hold of what it is that they are supposed to liking. I think that’s a really crucial thing. If you’ve got that idea in your head at all times when you’re being creative…being creative isn’t plucking random ideas from the air, it’s about corralling those ideas into a form of communication and making sure that communication is clear. What is it this band or artist is trying to tell me. That is what we are looking for in an artist and you hope that is going to come from the artist. Sometimes that falls on the label to say- you’ve forgotten the central point, what are we doing here? If you’re trying to achieve certain goals, that is really important. Then there’s loads of other really boring stuff! Drive yourself. Don’t expect other people to do stuff for you. It’s going to be hard. All that kind of stuff. You have to subscribe to a DIY aesthetic while presenting a professional forward-facing outlook.