Rightscorp, a company with a history of hemorrhaging money with its ill-fated attempts to defeat piracy by means of aggressive letters and robocalls appears to have more money-losing ventures planned for 2017, doubtless to the chagrin of any remaining investors.

Rightscorp is doing some aggressive whistling in the dark. The company that thought it could tackle piracy with threatening letters, threatening robocalls, and suing ISPs for contributory infringement has been bleeding money since its inception.

By the middle of 2015, Rightscorp's letter-writing campaign to torrenters had led to nothing resembling a viable business model.

According to 10-K documents filed with the SEC earlier this month, the total loss from Rightscorp operations for 2014 was $3,398,873, with revenues of just $930,729 for the year. "As of December 31, 2014, our accumulated deficit was approximately $7,093,377," states the filing, adding that the company lacks the revenue to allow it to "continue as a going concern." Rightscorp stock price, meanwhile, similarly isn't much to write home about. Not so viable for a company that on a recent earnings call declared itself "one of the only viable solutions to the multi-billion dollar problem of peer-to-peer piracy."

One year later, Rightscorp itself was finally questioning its own viability.

There's another 10-K from the company due in March. Chances are there will be nothing in it to reassure whatever investors the company has left. Its stock price is lower than it's ever been… which isn't really saying much as it's spent the last couple years south of the 25-cent mark. 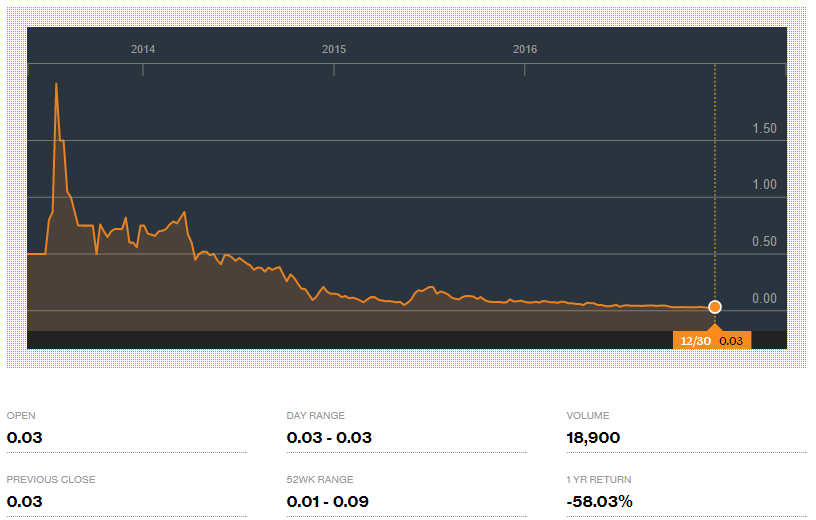 With more bad news on the near horizon, perhaps that's why it appears to be acting as its own cheerleader ahead of its eventual mandated disclosures. Its December 26 press release contains some questionable assertions, not the least of which is that it's the "content creator's champion."

In the notice of infringement, Rightscorp offers a choice between paying a small settlement fee of $30 facing a possible lawsuit for damages of around $150,000 USD under the Digital Millennium Copyright Act (DMCA), the current law.

It's a false choice. Rightscorp and the artists signed to it aren't going to sue individual infringers for $150,000 in statutory damages. (Instead, Rightscorp has intervened in questionable lawsuits against ISPs for contributory infringement.) The RIAA found out long ago that dragging people IP addresses to court generated more antagonism than revenue. There are a few copyright trolls out there milking porn/terrible films with speculative invoices filed in federal court against fistfuls of Does, but none of them have shown this reliably generates revenue, much less deters piracy.

So far, Rightscorp is only chasing down music pirates. That plan of attack has worked so poorly the company can barely keep its doors open. Naturally, it's decided it isn't wasting its limited funds fast enough. (All grammatical/spelling errors in the original.)

A small growing company with modest revenue, Rightscorp has by no means conquered the problem of Internet piracy. But with proven technology, a unique way monetize digital loss prevention, and an astute management team at the helm, investors should take a serious look at Rigthscorp. In 2017, the Company is pursuing an aggressive growth strategy in focused on expanding its reach in the film and television arenas.

Rightcorp's statement is accurate when it says it hasn't conquered internet piracy. The next sentence, however, is filled with assertions so blatantly wrong, the only way they could possibly be made with a straight face is via this exact form of communication: a self-congratulatory press release.

The only thing "proven" about its "technology" is that it's able to uncover IP addresses. This is where its form of speculative invoicing originates, with letters going to ISPs, which are then asked to forward them to the subscribers at the listed IP addresses. Rightscorp doesn't know who the alleged infringers are, so there's not a lot technical wizardry going on here.

And yes, Rightscorp has found a "unique way [to] monetize" its anti-piracy effort. It all depends on how you choose to define "unique." And "monetizaton." "Hardly at all" seems to be a fairly accurate summation of its "unique monetization." "Doesn't make much money at all, actually" is another tagline that could be applied to it.

As for the "astute management" at the helm? I don't know. Rightscorp has already seen what isn't working and wants to do more of it for more forms of content. That's the definition of "insanity,"not astuteness.

I don't think Rightscorp has much left in the tank. Its decision to build its business model on something that has failed for many others was never a good idea, even if it routed its demand letters through ISPs, rather than federal courtrooms. Once you've suckered in the easily-intimidated and the poorly-informed, you're faced with the considerably more-uphill battle of talking file sharers out of $30 per alleged infringement using nothing more than boilerplate and the ethereal threat of statutory damages. It hasn't worked so far for Rightscorp. Adding movies and TV shows to the mix isn't going to fix what's fundamentally wrong with its strategy. It's only going to give Rightscorp new ways to fail.