From Austin To Memphis: What It Takes To Build A Music-Tech City In 2017 [Cherie Hu]

In this piece Cherie Hu explores the complexities of bridging the gap between tech and music in cities, whether the two camps might be able to collaborate productively, and how such a collaboration might be affected by a city's socio-economic position. 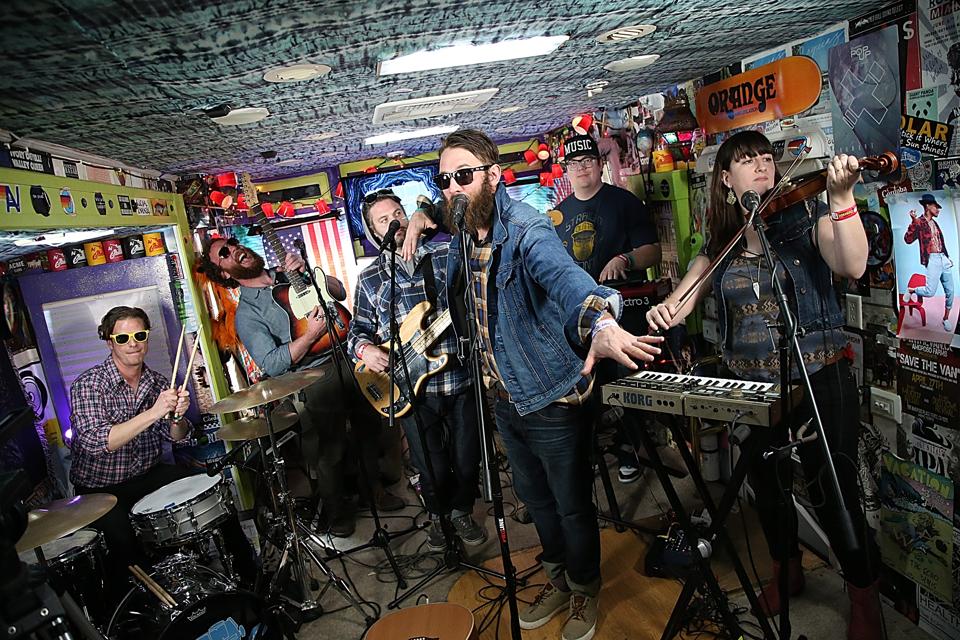 Silicon Valley for music. Even today, this phrase smells of paradoxy. After all, so much of the music industry's recent history has been carved out by an ideological and geographical separation from tech entrepreneurism—the likes of Napster in Boston, BitTorrent in San Francisco and Spotify in Sweden disrupting the incumbents in New York and Los Angeles, forcing record labels, publishers and their artists to catch up to the consumer-facing allure and logistical B2B mess of file-sharing and streaming.

Yet, the "radical" concept of a music startup haven may slowly be crystallizing into a reality, as tech talent flocks to historic music cities at unprecedented rates. Austin, TX, a vibrant live-music town home to festivals like SXSW and Austin City Limits, topped FORBES’ latest list of U.S. cities creating the most tech jobs, boasting a 73.9% growth in tech sector employment from 2004 to 2014. Nashville and Memphis also made the list, at No. 8 with 68.6% growth and No. 10 with 35.3% growth over the same time period, respectively. Several specialized music accelerators such as Zoo Labs and Project Music have sprouted up across the country, in an attempt to bridge these burgeoning tech and creative communities.

In addition, investment in music is rising on the policy level, as governments recognize the art form’s potential to drive both economic growth and civic engagement. The Colorado Office of Economic Development and International Trade recently injected $200,000 into a statewide music-industry research and revitalization project known as the Colorado Music Strategy (COMS). The City of San Antonio, TX recently gave $25,000 to nonprofit San Antonio Sound Garden to collect data on how musicians make and distribute their work. Conferences and networks such as the Music Cities Convention and the United Nations' Creative Cities Network are further driving this agenda to cultivate robust creative communities.

Of course, sealing the gap between local music and tech will be much easier said than done. To what extent are musicians and tech experts actually motivated, or financially able, to collaborate with each other? What deeper socioeconomic issues could present obstacles to growth? Success in bridging these communities will involve carefully evaluating a city's unique economic and cultural positioning in the national and global music landscapes, as well as learning key lessons from other entrepreneurial industries.

Only over the past few decades have organizations begun formalizing the interplay among economic expansion, community development and the arts. In the 1990s, Harvard Business School Professor Michael Porter popularized the concept of “clusters,” or geographic concentrations of related companies and institutions in a particular field, heavily influenced by local assets and designed to make regional communities nationally and internationally competitive. Expanding on this idea, the National Endowment for the Arts coined the term "creative placemaking" in 2010, recognizing that arts-driven collaborations among public, private and nonprofit sectors could spur job creation and revitalize infrastructure.

As with any other industry, central to establishing a “music cluster” is the recognition of a unique, sustainable competitive advantage. One of the best lessons in this vein comes from Y Combinator Co-Founder Paul Graham, who admitted that he was unconvinced about startups' potential in Pittsburgh, PA until learning about the city’s “youth-driven food boom.”

This trend seemed to fit the template for startup success like a glove: cuisine is a key facet of a city’s identity and personality, while most startup employees fall within the 25- to 29-year-old age bracket. Hence, Graham saw an exciting opportunity for Pittsburgh entrepreneurs to capitalize on the city’s culinary scene, "treat[ing] the people starting these little restaurants and cafes as [their] users." Such a ploy is not merely about exploiting cultural capital for financial gain; it's about giving this capital a visible footprint on the world map.

What the music-tech industry could learn from Graham is that globalization doesn’t necessarily make knowledge more important than space. Whether your music startup is a "good idea" will depend a lot on your immediate context. For instance, Memphis has a reputation not only as the nation’s "logistics center," but also as a recording town, with strong studio brands like Sun Studio (B.B. King, Elvis Presley), Stax Records (Otis Redding, Rufus Thomas) and Royal Studios (Bruno Mars, De La Soul). Hence, its most successful music-tech products center around plugins for digital audio workstations, metadata improvements and other B2B solutions, rather than B2C ones. In contrast, Austin’s status as a live-music town leads many of its music startups to target event producers, talent buyers, live performers and concertgoers as their key clients. Many musical talent pools, however, remain alarmingly detached from local tech scenes. According to the 2015 Austin Music Census, software development and venture capital are among the weakest skill sets in the city’s music industry. Memphis’ tech-savvy workforce remains relatively small and vacant, with an estimated 1,000 tech jobs still unfilled.

This fragmentation is due in part to how both artists and entrepreneurs are strapped for cash, struggling to secure resources like venture capital funding or affordable housing. For instance, while Austin is a thriving music hub, over 20% of its artists live below the federal poverty line, and another 30% hover just above it; likewise, 16% of the city's music-business owners make $10,000 or less a year. Memphis' overall poverty rate, while having declined over the past few years, remains as high as 18.4%.

Perhaps counterintuitively, travel presents a potential barrier to local growth in both directions. On one hand, due to geographical constraints, many entrepreneurs trying to break into music-tech in the southern or midwestern U.S. invest substantial resources in flying out to Silicon Valley or LA to seek opportunities with outside brands. On the other hand, some popular U.S. music destinations are experiencing a prolonged tension between a growing, globalized tourism industry and a shrinking local scene. For instance, according to TXP’s report The Economic Impact of Music, music-related travel to Austin grew by 37% between 2010 and 2014, but the city's music production shrank by 15% over the same time period.

These factors exacerbate financial pressures while presenting a sort of chicken-or-egg problem: venture capital will only follow proof of concept and of community, but establishing such a community requires financing. “Unless there's a solid local industry identity, like the auto industry in Detroit or the music industry in LA, venture capital won’t thrive because it won’t know what to focus on,” says Paul O’Brien, Founder of Austin-based MediaTech Ventures, which seeks to advance the role of tech across music, journalism, film, gaming and other media sectors. According to O’Brien, Austin hosts around 120 music-tech startups, none of which have raised Series A funding.

Moreover, many emerging music-tech cities rely on a particular historical legacy, which some may perceive as independent of technological advancements in the industry. “For a lot of us, our previous works generate our new business, because people read ‘recorded in Memphis’ somewhere in the liner notes for older albums,” says Lawrence "Boo" Mitchell, owner of Royal Studios and member of the Grammy Producers & Engineers Wing Advisory Council. “If you stream or download an mp3 today, you probably have no idea what studio it was recorded in. It’s highly unlikely to get that same liner-note experience digitally.”

With a lack of financial resources and a focus on back catalog, locally-active artists tend to be stingier about the music-tech that comes their way. “Most of the time, people create technical indulgences that don't really do anything for the spirit of the music,” asserts Gebre Waddell, CEO of Memphis-based audio tech startup Soundways and the newly-elected Co-Chair of the Grammy Producers & Engineers Wing. “The musicians here are going to be a lot more critical. They’ll keep asking you, ‘Are you just making a toy, or something that will actually serve the music better?’”

One of the most urgent needs for musicians and music startups are affordable housing and coworking units. COMS has made affordable living space one of its core pillars, collaborating with national real estate nonprofit Artspace as well as the state's Creative District Program. The city governments of New York, Nashville and Minneapolis have all pledged more affordable housing solutions for artists, through organizations like The Housing Fund, Ryman Lofts and A-Mill Artist Lofts.

Building a solid music identity in the long term also requires tackling deeper socioeconomic problems. Many governments are encouraging ties between the music industry and educational institutions, including Nashville's major label-sponsored program Music Makes Us and COMS' collaboration with the University of Colorado Denver’s Department of Music Entertainment and Industry Studies. “When you overlay the problems of poverty and education, the arts are really going to struggle unless we foster deeper partnerships between arts organizations and universities,” says Gayle Rose, CEO of EVS Corporation and Chair of the Memphis Symphony Orchestra Board of Directors.

Other current policy and grant initiatives wield live music as a deliberate community development tool. The COMS program Detour will enable Colorado musicians to perform and engage through residencies in rural areas with local nonprofits, radio stations and schools, using touring as a "community-based, sustainable and creatively rewarding practice.” Since 2014, the Mortimer & Mimi Levitt Foundation has run the annual Levitt AMP Grant Awards, which gives winning cities $25,000 in matching funds to present a free concert series throughout the year.

“These shared music experiences have proven not only to strengthen existing social networks, but also to encourage social bridging, with people reaching across demographic boundaries,” explains Sharon Yazowski, Executive Director of the Levitt Foundation. “It changes perceptions of public spaces, and catalyzes other neighborhood improvements.”

Beyond policy, many music-tech entrepreneurs see high potential in more convergent business models that leverage other media formats to design cross-sector solutions. MediaTech Ventures and Chicago’s 2112, an incubator that brings together music, film and tech under a single roof, are two examples of such a paradigm. The underlying idea is that a "music city" should not exist in a vacuum, but rather should integrate smoothly into, and ultimately improve, adjacent economies.

“Streaming is definitely not the be-all-end-all solution for the music industry,” says O’Brien. “I think the answer will lie in some combination of video, live streaming, advertising and self-publishing. The optimal solution for musicians is going to come from all different forms of media being accessible to them in ways that it wasn't before, and our job as an industry should be to show how to make that convergence possible.”