Spotify recently filed 217,112 "address unknown" NOIs with the U.S. Copyright Office saying that they were unable to locate any owner of these copyrighted songs anywhere in public records. 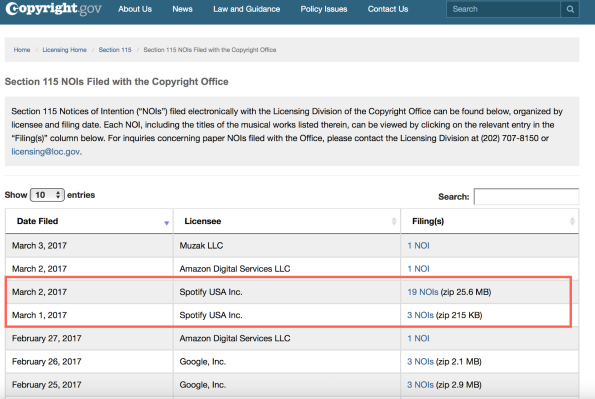 Spotify recently became one of the latest to move aggressively to take advantage of the “we can’t find them” loophole in the Copyright Act.  Rightscorp informs me that after uncompressing the NOI file from the Copyright Office site, Spotify has filed “address unknown” NOIs for 247,112 songs.  MTP readers will recall that this loophole allows digital streaming services to claim that the service cannot “identify” a song copyright owner in the public records of the Copyright Office even if the song owner could easily be identified elsewhere, like in the records of the digital service itself (such as Content ID) or in the files of the services licensing agent, or with the U.S. PROs, or after a simple search.  (See also my interview for Music Tech Solutions on the subject with Rightscorp’s CEO Christopher Sabec.)

The punchline, of course is that the service will claim the protection of the compulsory license and will not pay royalties until the song owner is identified in the public records of the Copyright Office.  When might that happen?   When the song owner files a copyright registration or other recordation in the Copyright Office which they are not obligated to do in order to enjoy many of the rights of a copyright owner, including being paid mechanical royalties.  The “address unknown” loophole will ring especially hollow with songwriters who reside outside of the U.S. and who are members of a non-US PRO.

One can understand more readily how a U.S. company not familiar in the ways of the international system might find the mass NOI filing attractive, but it is a bit harder to understand how the U.S. affiliate (Spotify USA) of a European company (Spotify AB) doing business with European songwriters all the livelong day could possibly make this unforced error.

In fairness, it’s also important to recognize the need for the address unknown filing as long as you’re going to have a notice-based compulsory license.  Musak’s filing, for example, is a handful of songs that do look genuinely obscure.  I’d suggest that’s an example of a company using the statute the way Congress intended.

On the other hand, Spotify joins the artist-friendly ranks of Google (6,041,943 NOIs), Amazon (19,509,450 NOIs) and Pandora (1,193,346 NOIs) in piling on to the loopholeapalooza currently happening at the Copyright Office that has received over 30 million address unknown NOIs since April 2016 based on Rightscorp’s calculations.  Spotify’s case is particularly bizarre because of the high profile settlement the company entered with the NMPA that established a claiming service for those who signed up in time.

If you call out these services on the subject and ask why they need to get a royalty free license, their representatives will sometimes say that the lack of a royalty was not the motivation for loopholeapalooza–their companies were just trying to avoid liability for copyright infringement class action lawsuits.  They’ll tell you informally that their companies intend to pay every penny they owe or some other swiss cheesy statement like that.

They may even say that they intend to pay retroactively once the song copyright owner is identified.  But since the loophole only requires that they pay going forward, a retroactive payment is not required and therefore they don’t “owe” it.

See what they did there?

They haven’t put that retroactive payment promise in writing to the world by any means and they also don’t send statements to the Copyright Office.  How would a songwriter ever know what they were due either retroactively or prospectively?  (It’s also important to know that there is no audit right under a compulsory license, so as soon as a songwriter agrees to take that compulsory license without a struggle, the songwriter is essentially waiving a right to past certified accountings required under the compulsory license and to audit for either the past or the future.)

The Spotify “address unknown” NOI filing of 237,000 plus songs doesn’t pass the laugh test in many cases.  It includes titles from Timothy B. Schmidt (formerly of The Eagles), a number of artists signed to “WM Spain” which after a 2 minute search appear to be songs performed by artists signed to Warner Music Spain, as well as artists signed to Parlophone UK and well-known catalog artists like Uriah Heep.  (Parlophone was owned for many years by the former employer of one of Spotify’s former Chief Content Officers.)

For starters, the idea that Spotify can’t find Tim Schmidt is simply ridiculous.  But more troubling is a common thread through the mass NOI filings by the big services–there seem to be an awful lot of ex-US or non-Anglo American releases which presumably include songs by songwriters who probably don’t know the loopholes of U.S. law or who might have the strange idea that maybe the Berne Convention’s prohibition on formalities might prevent their falling subject to this stunt.

At least in some spot checks, it seems like many of these “address unknown” NOIs are faulty and possibly noncompliant for a host of reasons.  In Spotify’s case, though, it’s particularly hard to understand given that their NMPA settlement barely has dried ink and already they are back at the shenanigans for at least some songwriters who are easily found.

I guess you can’t find them who you don’t look for.