The MP3 Is Dead, Long Live The MP3

Although the ability to 'kill' anything on the internet is questionable best, the alleged demise of Pepe The Frog was accompanied by the apparent death of the MP3, after the research company which holds the patent for MP3 coders and decoders terminated their licensing program for said patents.

Last week, there were two widely reported "deaths" on the internet: Pepe The Frog and the MP3 audio codec. Most people seemed to understand what was meant by the former headline — that you cannot in fact kill a meme, no matter how distasteful its use, and the death of Pepe in an official cartoon strip was a symbolic disavowal of the character by its creator. But on the MP3 issue people seem a bit more confused.

Here's what happened: in late April (not sure why there was such a big delay in the explosion of blog posts) Fraunhofer IIS, the research company that holds the patents on MP3 encoders and decoders, announced that it had terminated the licensing program for those patents, for the stated reason that the format has been surpassed by alternatives like AAC (which is also patented and licensed by Fraunhofer). For some reason, a whole lot of media outlets have accepted this at face value and reported that the format is now officially on its way out. "The MP3 is Dead" headlines abound, with only a small few bothering to add qualifiers like "according to its creators" or the classic rejoinder "long live the MP3": 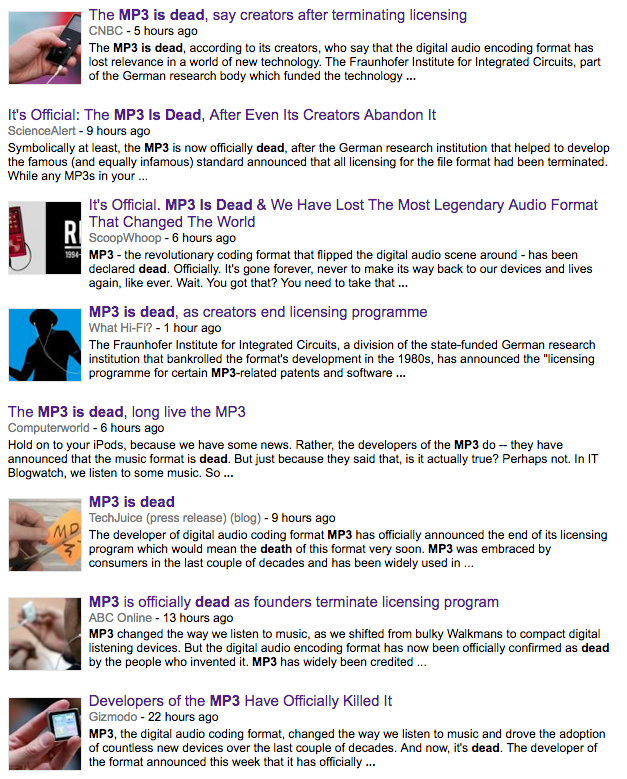 Most of the articles buried some attempt to call the move "symbolic" or clarify that the files would still exist towards the end of their coverage, after much eulogizing, but almost none took the time to understand anything about the patent situation, or expose Fraunhofer's huge lie of omission in its announcement.

Because here's what really happened: the last of the patents related to the MP3 format expired (or will very soon — more on that later), so Fraunhofer has nothing left to license. The termination of the licensing program was not a choice, nor was it suddenly motivated by the ascendence of another format that has itself been around for 20 years. Most importantly, despite what many people have reported, this does not mean the death of the MP3. Of course, Fraunhofer's statement didn't contradict any of these things, it just omitted them all and left people with the implication that this move ensured the decline and eventual death of the format — when in fact it likely means the exact opposite.

Prior to this, developers wishing to include MP3 functionality in their software needed a license to do so. If you use Linux, or open source audio tools like the excellent Audacity, you already know this: open-source software doesn't ship with MP3 encoding and decoding capabilities built in, but requires you to separately download and install the codec so as not to pollute the FOSS package with proprietary, patented code. That's no longer the case, and indeed Red Hat has already announced that Fedora will now ship with MP3 capabilities built in (hat tip there to one of the few blogs that is reporting this story properly). Expect Audacity and countless other FOSS apps to follow suit soon. As for non-open-source software, it's one less patent number on the long lists of licenses that live on loading splash screens and About dialogues, and a little bit of saved cost. All around, it's the removal of a barrier to building apps and tools that work with this ubiquitous audio format.

So does Fraunhofer's announcement actually mean anything? Well, a little bit: as noted, it actually hasn't been 100% clear when all the patents would expire, due to the size and complexity of the patent thicket in the overall MPEG ecosystem. It was generally agreed that all patents covering MP3s would expire this year, and many had pegged the date as the end of April, but this was much harder to confirm. Fraunhofer's announcement does not offer any specific information to make this determination easier (since it doesn't admit that this has anything to do with patent expiry at all), but developers like Red Hat are taking it as a sign that the patents are officially expired and the format is free to use.

While it's frustrating that Fraunhofer issued such a misleading statement, it's even more frustrating that so much of the media uncritically parroted it. Some also decided to throw in some scattershot links to various questionable studies claiming MP3 compression has negative effects like stripping out the "emotion" from music (that particular study was conducted on just 20 college students, and used MP3s encoded at a bit-rate well below the modern norm for music distribution) to bolster the idea that MP3 compression must be replaced by the still-patented AAC codec. I'm sure Fraunhofer was grateful.

So, no: the MP3 is not dead. Its creators have not killed it. Like Pepe the Frog, it's alive and well and probably isn't going anywhere for a long time — except in this case we can actually be happy about that fact.