Although their recent multimillion dollar settlement with songwriters is doubtless a weight off of Spotify's shoulders, the company has a long way to go, says Chris Castle, and probably many more lawsuits to get through on its journey to IPO riches.

While Spotify’s technocrats may be breathing a sigh of relief after the company’s most recent multimillion dollar settlement with songwriters, it is well to remember that the company is probably not anywhere close to out of the woods.  As others have learned the hard way, once you replace the rights of songwriters and artists with your own lust for IPO riches, the lawsuits can go on for a very long time indeed.  You would think that after nearly 20 years of massive infringement online, the obvious answer would suggest itself to the “get big fast” group:  Don’t use music you don’t have rights to use.

The typical reason given by interactive services about why their need to offer unlicensed music exceeds their desire to offer only licensed music is because of competitive pressure from YouTube.  Why do they feel this competitive pressure?  Because their investors tell them at every board meeting that they should feel it.  But let’s be clear–I doubt that Tim Cook gets Eddie Cue in a headlock over the issue over at the Infinite Loop.  If you agree, then that kind of narrows it down.

But entertain that idea for a moment, however ill founded.  Why is YouTube able to sustain this competitive position that supposedly makes otherwise licensed services soil themselves with fear of being undercut and overrun by YouTube?

That’s right–the “DMCA license”, or YouTube’s absurd use of the “safe harbors” granted to them under the U.S. Copyright Act which YouTube likes to think makes them bullet proof.  (Which is also what Cox Communications thought until they weren’t and is probably what Facebook thinks, too.)

So get that straight–some would say that The Golden Child (aka Spotify) is to be allowed to limp their way to the increasingly inexplicable goal of some kind of big financial reward (or “exit”) in an IPO of whatever stripe while we are all asked to look the other way and allow them the same shite arrangements that YouTube enforces through lobbying, litigation and unprecedented monopoly position (aka crony capitalism).

And you thought it was all about the “Value Gap”?  Apparently not.

We are being told that the licensing practices of interactive services should be allowed to look more like YouTube’s widely loathed safe harbor and YouTube tries to make us believe that they are really pro-artist.  We are asked to hold the proposition “A” and the proposition “not A” in our heads simultaneously.  It can be done, but it is rather uncomfortable and it is uncomfortable because in this case it is unnatural.  Not to mention, it is, of course, all bull.  Irving Azoff crystalizes the view no doubt held by everyone who has ever dealt with any of these people:

“The truth is that, despite having to compete with services like YouTube who hide behind outdated, safe harbor protections, legitimate services like Spotify and Apple Music are attracting more subscribers than ever,” he continued. “If YouTube had the same level of commitment, their subscription service would be more than a head fake—and they’d be working hard, like Spotify does, to convert users to the paid tier for unlimited music. Maybe Google should do a study on that.”

The difference is that Irving is actually looking out for the best interests of his clients and is not afraid to tell the truth.  The one clarification I have to his assessment is that Apple doesn’t seem particularly worried about their competitive position–it is Spotify that runs to the Nanny State at every turn and files mass “address unknown” NOIs all the livelong day.

And then, of course, the whole “Value Gap” concept is only half right–it should really be called the Pinto Gap, because it’s not just that Google decided to make money off the backs of artists and songwriters through a distorted loophole.  Google also made that choice to be a knowing mass infringer the same way Ford decided to knowingly sell consumers its Pinto model with an exploding gas tank.  It profited them to do so, just like it profits them to trade in terror recruiting videos.

So the Pinto Gap is not much of an excuse for either a competitor service, the DMCA safe harbor, or as a policy the industry should support.  (And that goes for Facebook, too.) 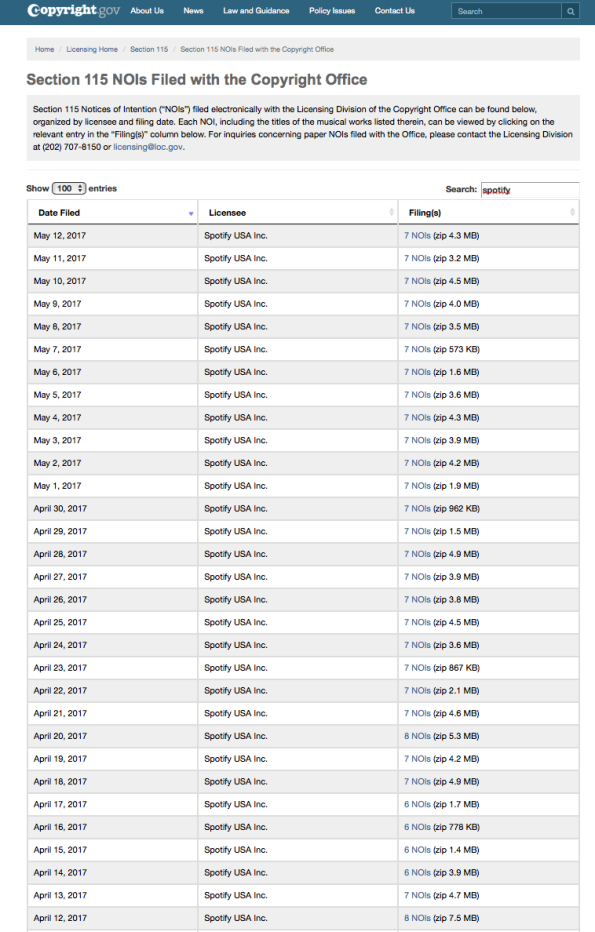 As it stands now, it would at least potentially be a big mistake to assume that Spotify has done sufficient ameliorative work to be prepared for the big bucks to roll in (for everyone except the songwriters and artists).  All that these songwriter settlements have done is allow songwriters the chance to earn a royalty from Spotify that starts two or maybe three or maybe four decimal places to the right, depending on the month and which of Spotify’s two main services are serving the song or recording.  This is not particularly exciting news for songwriters once the bloom is off the class action rose.

It’s entirely possible that a lawsuit could be brought by any songwriters who are not part of the latest class action or a private settlement.   That certainly would explain why Spotify showed a sudden interest in serving hundreds of thousands of notices on the Copyright Office using the “address unknown” NOI loophole.  The company has probably been advised this tactic would fend off future infringement lawsuits and allow Spotify to use songs under the compulsory license.  It might, but there is a telling section of the settlement document (at p.4) that echoes my own criticism of the mass NOIs (so naturally it caught my eye):

Spotify will invest time and resources to initiate and support an industry-wide
effort (to include representatives of composers, publishers, streaming services,
labels, and others) with the goal of obtaining and digitizing all U.S. Copyright
Office registration records for musical works registered before January 1, 1978,
and making that information far more accessible to the Class. (my emphasis)

Why is that language intriguing?  Because it is likely there for a reason the language dances around–the public records of the Copyright Office are only searchable online for registrations or recordations after January 1, 1978 and are paper records before that date.  We have long believed that digital services are not going to search the paper records of pre-78 works but are going to file mass NOIs based on “address unknown” status on pre-78 works without actually checking to see if the address is in the Copyright Office records.  Why?  Because when you’re born digital you don’t stoop to looking through paper.  And because it is consistent with their “seek forgiveness not permission” approach that is proving so costly.  Even if they get sued faster than a three finger swipe.

That’s also not going to help them with any stream rips of live shows that have found their way into the extremely porous aggregators that distribute to these services or any other illegal distributions of sound recordings for which a compulsory license isn’t available in the first place.

In other words, if Spotify (or any other service) relies on the mass “address unknown” NOI loophole for pre-78 works without doing the proper research, they are potentially right back where they started–if not worse, because they potentially have misfiled their mass NOIs on a grand scale.  And you know who is good at looking into things done on a grand scale is a grand jury.

So it comes down to the same issue–if the service really is all that valuable, then wouldn’t the fastest way of identifying song owners be by refusing to post their songs until there’s a license in place?  Particularly if you don’t buy into the Pinto Gap excuse?  Isn’t the market much more likely to produce that information in an efficient way through the exercise of leverage and rules?  You know, like the Copyright Act?