Famed educator and music enthusiast David Skorton recently opted to give online education a shot in the form of a music course. Here he shares his experience and talks about what he sees as the future of online education.

Renowned educator David J. Skorton has been playing music as a hobby for nearly 60 years, so it makes sense that when he first decided to test the waters of online education, he dipped into a music course.

“This last year I decided I wanted to learn about music a little more in depth than I had done by being sort of a hack,” he says.

Whenever Skorton speaks about music, his language is infused with a humble humor. “In my office here, I have a music stand and a flute,” he says about his current Washington D.C. workspace at the Smithsonian. “At the end of the day I play sometimes, when there is nobody around that I can torture.”

He’s not nearly as much of a hack as he’d have you believe. During the nine years Skorton served as President of Cornell, he was afforded opportunities to sit in with Billy Joel and Wynton Marsalis. As video proves, he added tasteful flourishes to the music of these masters.

“You know, those guys must have lost my cell phone number,” he jokes, “because they never called me back to go on tour.” 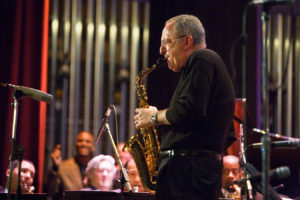 Skorton is pictured here in 2015, performing with the Cornell Symphony Orchestra at My Cornell: A Celebration in Words and Music.
CREDIT: Lindsay France/Cornell Marketing Group

“This was the first time I ever actually did a course online, just because of time,” he says. “When you get to be an old geezer, which I definitely am now, you start realizing that there’s always time to do something that you always had a passion and love for.”

While he enjoys playing music and talking about it, Skorton gets more serious when discussing education, especially where it concerns the future.

“It’s really, really hard to predict in such a rapidly changing technological environment exactly what’s going to end up being an important way to get information across,” he says. “A professional life in education has taught me that there is no one-size-fits-all: It’s really important that we give students a variety of ways of acquiring information.  . . . I don’t imagine that one technological thing like online learning is going to sweep the climate free of all those different options, but I do think online education is going to have a big effect based on the individual proclivities of the student.”

What Skorton found encouraging about his first online learning experience was that there was still a human touch to the teaching.

“His really affable manner,” he says of Songwriting teacher Pat Pattison, “slightly camouflages the very deep substance that he gets across in the course. I was really impressed.”

As for George Russell Jr., his Theory teacher, Skorton says, “That course not only has a quite a bit of substance on music theory, but also I was inspired to watch him play piano.”

Though Skorton’s job as the Secretary of the Smithsonian keeps him busy—he’s in charge of 19 museums and galleries, 20 libraries, and the National Zoo—he says he plans on going beyond Berklee Online’s free offerings in the future.

“I’m certain at some point I’ll enroll in a regular course there,” he says, referring to Berklee Online’s standard 12-week offerings.