It's release day for Taylor Swift's new album "Reputaion," but all is not right win Swift World, after a blogger wrote a post concerning her "unofficial position as a white supremacist hero." Although said post didn't go so far as to suggest Swift has encouraged the belief, it was enough to spur her legal team into demanding the removal of the offending post, claiming it as defamatory and filled with "malicious lies".

By Tim Cushing of Techdirt

Taylor Swift's legal representation is busy again. Really, her reps are never not busy, thanks to her desire to capture the entirety of the Taylor Swift market, but this particular legal threat — aimed at a blogger — oversteps its bounds egregiously.

PopFront editor Meghan Herning wrote a post detailing Swift's unofficial position as a white supremacist hero. While there's nothing in the post claiming Swift has directly encouraged this subset of her following, it did point out that she's remained curiously silent on race issues, as well as made use of Nazi-esque imagery in her videos.

The story knowingly regurgitates, repeats, and attempts to expand on a malicious lie. Among other things, the story propagates such hideous falsehoods as: 1) “Taylor’s lyrics play to [a] subtle, quiet white support of a racial hierarchy;” 2) that there are similarities between Ms. Swift and Adolf Hitler; 3) that the “lyrics [of “Look What You Made Me Do”] are the most explicit in speaking to white anger and affirming white supremacy;” and 4) that Ms. Swift’s purported silence regarding white supremacy means she supports Donald Trump and identifies with the white supremacist/al-right movement.

The rest of the cease-and-desist is more of an angry letter to the editor. The legal firmness of Venable LLP's stance takes a backseat to general, non-litigious complaints about the post's assertions. Swift's attorney says his client has done plenty to combat racial inadequacy and is under no obligation to campaign for the Hillary Clintons of the world. Fair enough, but really not the sort of thing actionable legal claims can be built on.

Unfortunately for Swift and Venable LLP, the ACLU has stepped in to represent PopFront and Meghan Herning. It has answered with a letter [PDF] of its own that completely disassembles the stupid, sometimes disingenuous statements made by Swift's legal rep.

First, the blog’s statement that “Taylor’s lyrics seem to play to the same subtle, quiet white support of a racial hierarchy that benefits them,” is protected opinion. As an initial matter, your letter misquotes the blog post by omitting the word “seem,” a term signaling that what follows is an opinion. This omission suggests that you well understand that the actual post is stating an opinion, protected by the Constitution. If you are going to write a letter accusing a person of misrepresentation, you should avoid misrepresenting what she wrote.

The ACLU's letter points out Taylor Swift is a celebrity. The defamation bar is much higher for public figures, especially since the same fame that grants them money, power, and all the other nice things in life also makes them targets for criticism. Criticism isn't immediately synonymous with defamation, no matter how much Swift's lawyer would like it to be. And, again, the ACLU's letter makes this point while knocking the C&D for its attempt to put words into the blog post's author's mouth.

[Y]our letter asserts what the blog does not, “that Ms. Swift’s purported silence regarding white supremacy means she supports Donald Trump and identifies with the white supremacist/al-right [sic] movement.” It is not clear what your statement refers to, because there is nothing in the post that says this. The post does state that “there is no way to know for sure if Taylor is a Trump supporter or identifies with the white nationalist message, but her silence has not gone unnoticed.” But this is a far cry from stating that she supports Trump or identifies with the alt-right. You are of course absolutely right that “Ms. Swift has no obligation to campaign for any particular candidate or broadcast her political views.” But nor does she (or, probably more to the point, her lawyers) have the authority to tell other people the conclusions they can draw from her decision to keep silent.

Thus, however, “hideous” you consider these statements to be, none of them are actionable.

To top it all off, the legal threat came with a paragraph claiming the letter was protected IP and could not be reproduced or published without permission. This is not just rank bullshit but it's also incredibly stupid. There's almost no phrase more guaranteed to result in permissionless publication than this one:

This is a confidential legal notice and is not for publication. Any publication, dissemination or broadcast of any portion of this letter will constitute a breach of confidence and a violation of Copyright Act. You are not authorized to publish this letter in whole or in part absent our express written authorization.

The ACLU makes this point by publishing Venable LLP's letter along with the following paragraphs in its response:

First, the claim of confidentiality can only be described as odd, particularly coming from a lawyer; you cannot really expect that a person who receives a letter like this will feel any duty to keep this matter a little secret between the two of you. And it is not without irony that at one point you ask that your “letter stand as yet another unequivocal denouncement by Ms. Swift of white supremacy and the altright,” but then purport to forbid anybody from making the letter public.

Second, you cannot use copyright law as a weapon to suppress your letter, because reproduction of it here is fair use under 17 U.S.C. § 107. Attaching the letter to this one transforms it from a clumsy legal threat to suppress constitutionally protected speech into an exposé of that attempt in order to educate others who might receive these types of letters that they need not be intimidated.

PopFront and the ACLU will not be caving in to Swift's bogus legal threats. Nor will they be building a time machine to comply with the demands for a retraction "no later than" one day before the legal threat was actually sent. 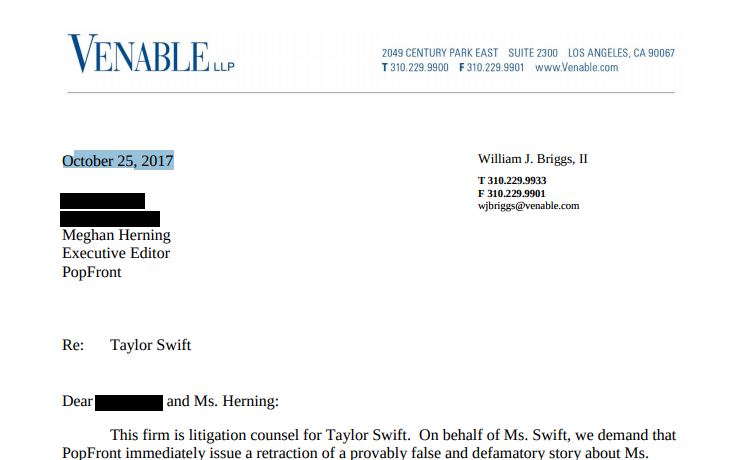 And later in the letter:

Stupid defamation claims and bogus copyright language are Streisand-bait. Someone working for a top-tier law firm and representing a top-tier artist should know better. And perhaps attorney William Briggs does know better, but has chosen to serve his client as well as possible given the circumstances. But providing top tier service doesn't necessarily mean acquiescing to every client demand. Briggs and Venable should have taken a pass on this one. Instead, they're going to be the recipient of the sort of criticism they attempted to quell with this misguided demand letter.