In this article, Cherie Hu explores how music festivals have adapted to the rise of playlist culture, through partnerships with streaming services and even the way in which festivals market themselves to fans. 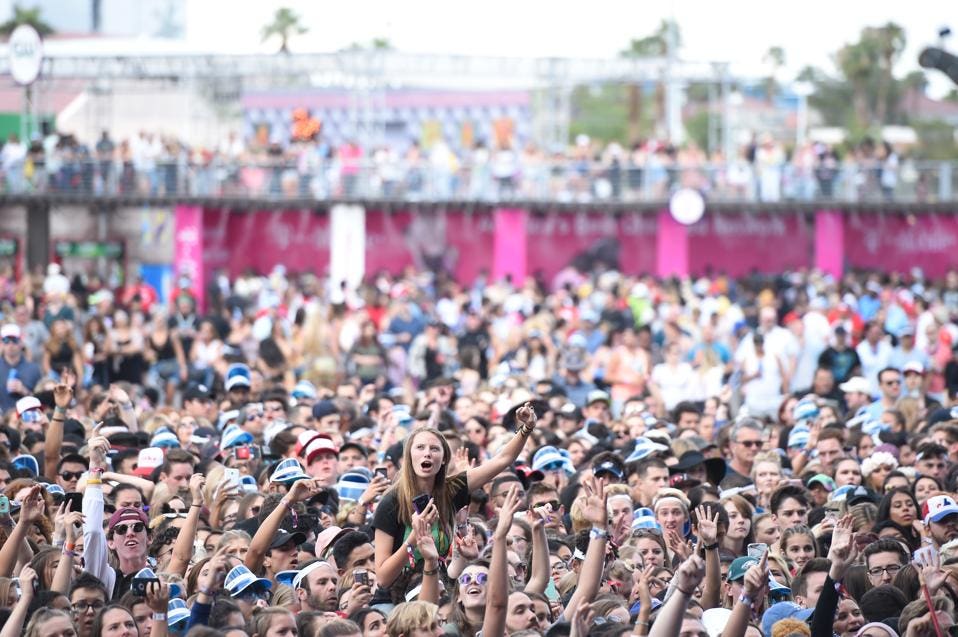 LAS VEGAS, NV – SEPTEMBER 23: Fans attend the Daytime Village Presented by Capital One at the 2017 HeartRadio Music Festival at the Las Vegas Village on September 23, 2017 in Las Vegas, Nevada. (Photo by David Becker/Getty Images for iHeartMedia )

Spotify, the world's leading music streaming service by market share, is no stranger to live events. Since November 2016, the company has partnered with Ticketmaster to deliver personalized concert recommendations and exclusive presale codes to subscribers, and has since grown its ticketing partnership roster to include Eventbrite and AXS. More recently, Spotify has expanded some of its most popular playlist brands, including RapCaviar and Who We Be, into its own multi-city tours, featuring performances by Cardi B, Stefflon Don, Gucci Mane and other streaming-bred stars.

Ironically, all this activity from Spotify was picking up just as Apple wound down its own music festival, which lasted ten years at the Roundhouse in London—but other streaming competitors are still fighting to claim their own stake in live music's future. Tidal has been producing the charity concert series Tidal X for three years, and is the exclusive partner of Budweiser’s annual Made in America Fest. Pandora recently launched Fall Into Country, a “digital country music festival” featuring a mix of live concerts and online station takeovers by the likes of Blake Shelton, Kelsea Ballerini and Darius Rucker.

For years, managers, promoters and booking agents have used in-depth consumer data from streaming services as a tool for contextualizing fan outreach strategies and tour planning. The ongoing launches of artist data dashboards across services, even on the notoriously opaque Apple Music, also signals a paradigm shift towards increasing transparency and reducing, rather than maintaining, friction in the sharing of information for artists and their teams.

Now, Spotify and others want to prove they can use their proprietary data to deliver added value in analog environments that its brick-and-mortar competitors might not be capable of replicating. More traditional music festivals (i.e. those without their own streaming services) are feeling the pressure both to compete and to align with these tech-savvy new entrants, on the axes of business models and cultural messaging.

In terms of business models, corporations and startups alike have experimented over the past few years with subscription offerings for live events. In May 2017, Live Nation launched the Festival Passport, which gave pass holders access to over 90 music festivals around the world for a fixed annual price of $799. Concert subscription startup Jukely, which currently operates in 16 cities across the U.S., U.K. and Canada, caters to more indie and emerging local scenes and offers four tiers of membership, ranging from $25/month for four shows to $65/month for up to ten shows.

As for the change in messaging, some festivals now want to position themselves as "live playlists"—as flexible, "shuffle-friendly" entry points for music discovery and fandom. For instance, I spotted the following sponsored ad from Boston Calling on Facebook last month: 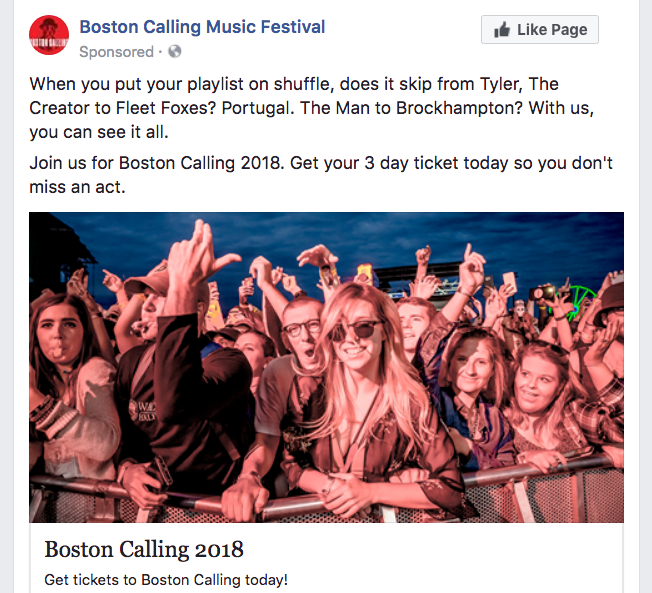 From a price perspective, matching festival culture with playlist culture is almost a no-brainer. As with a Spotify monthly subscription, an individual music festival charges a fixed price for a buffet-style experience, in which concert-goers can jump easily from one act to the next.

Embedded within this type of model is also an unspoken “moral physics” that favors, and deliberately programs, diversity and breadth over focused depth. Just like how Spotify views its growing listening diversity as a success, festival attendees are compelled to make the most of their $300 ticket by maximizing the number of sets they watch within an allotted period of time. The only difference between these two contexts is that festivals provide only a matter of days, not months or years, to milk the most out of this fixed value.

There is also a growing perception in the music industry that festivals have comparable influence to playlists and terrestrial radio stations in launching and sustaining artists' careers. As a result, more and more artists seem to be taking to social media to announce "festival dates" in place of "tour dates." For example, Arctic Monkeys recently announced an unusually packed slate of 15 festival bookings over the span of two months, matching the schedule and pace of a typical solo tour.

Particularly for indie acts with several performing members and/or elaborate stage sets, there is a strong financial incentive to book more festival gigs. Such acts usually take a loss on normal touring with high production overhead, and appreciate the opportunity to recoup that cost with even higher (and, some in the industry say, overpriced) festival fees that often do not require artists or their teams to provide much extra production support.

However, assuming that a playlist philosophy will continue to infiltrate the festival circuit, an over-reliance on the latter could be potentially problematic for fan community development. After all, in such an environment, announcing a series of festival dates is akin to advertising a series of playlist placements: sure, each placement may get you marginally more streams, exposure and money, but not more ownership over the audience.

In fact, in both contexts, a large portion of listeners may be bigger fans of the third parties mediating their experience than of the artists themselves. For instance, most festival attendees, with their mobile devices in tow, are paying hundreds of dollars with the ultimate goal of upping their social clout (access to parties, alcohol, merch, perfectly posed Instagram photos, etc.) and not just accessing a specific lineup alone. Likewise, many followers of Spotify's largest playlists are lean-back listeners treating songs as welcome backdrops for other activities such as a daily commute, workout or cooking session, rather than as an art form that demands undivided attention.

This detachment would not actually be a problem if artists received richer data about festival attendees—yet, despite the advancement of technologies like RFID and even facial recognition, audience identification, targeting and followup remain surprisingly difficult precisely because the artist-audience connection in question is so casual.

It is also worth noting that festivals' increasing resemblance to playlists fundamentally contradicts the role that the former used to play in indie bands' careers. A 2012 case study by the Berklee College of Music discusses how indie rock outfit Portugal. The Man developed much of its core fan base by logging over 800 live shows over the course of five years—but did not even consider any major festival placements until the end of this five-year period, by which point the band had perfected their live set and onstage dynamics on their own terms.

“Touring is one of the few real and sustainable avenues that an artist has direct control over,” Rich Holtzman, Portugal. The Man’s former manager and current Head of Music Business Development at Stubhub, said in the case study. Control was crucial for Holtzman, which was why he viewed the festival circuit as a marker of hard work and hard-earned reputation that arrived later in an artist's long-term vision, rather than serving as a launching pad for building a following from scratch.

Of course, playing a string of popular festival gigs is an incredible accomplishment for any artist, beginning or otherwise. Nonetheless, as festival culture converges increasingly with playlist culture, and as barriers to entry into the circuit get lower and lower, it will be crucial for artists and their teams to understand that the festival of the future is a bookmarking tool for the casual fan—and thus, like a playlist placement, cannot be treated as both the means and the end to a fruitful career.