Running Out Of Things To Say? Idea For Musicians To Write About Online 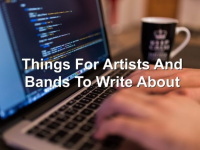 While communicating with fans is important, simply posting for the sake of posting doesn't make a lot of strategic sense, and since everything you write online is on some level of form of marketing and establishing your brand, it's important to take some time to think about what you post.

Just posting on any platform online just for the sake of having posts probably strategically isn’t a good idea. You want to post something that’s relevant to your music in some way so you can use it at least indirectly as marketing. Luckily, as a musician, you probably have plenty to write about. Here’s an excerpt from the second edition of my Social Media Promotion For Musicians handbook that provides some applicable topics that can inform your fans about what you’re doing:

“• Life on the road. A look at the various towns, venues and the people you meet while traveling from town to town.

• Life in the studio. Behind the scenes in the studio, the personnel you’re working with (the studio manager, the engineer, assistant, etc.), how a song was written and developed, what kind of instruments or mics you used, how long it took to record and mix, and a million other things that so many fans find interesting.

• Life in the business. The music business continues to evolve and you probably have lots of thoughts on piracy, streaming, ticketing, 360 deals, record labels, management and everything else that goes on behind the scenes.

• Life outside the business. Maybe you’re a runner, a vegan, a skydiver or a baseball fan, and you want to discuss these issues separately from your music.

• Topics of the day. Maybe you’re politically charged. If so, follow a site like Politico (or Fox News on television) and give your take on some of their articles or commentaries. If something like GreenTech is your thing, then set up a Google Alert for every time that’s mentioned in the news in order to keep your readers up on the latest advances. Be careful when you get into charged topics like politics or religion though, since it’s easy to get way off-topic into flame wars that cost you readers views and followers instead of helping your marketing.

• Keep a list of topics handy. Whenever I see something that I think might be useful to my readers, I immediately copy the link and create a quick draft post that isn’t published, but I can come back to at a later time. That way, I always have about ten topics that I can refer to if one day I come up dry, or I know I’ll be traveling or in the studio and won’t have time to create something new.

That’s just a few ideas for posting if you go dry. Remember, there’s always something to write about if you look around hard enough.”

You can read more from Social Media Promotion For Musicians and my other books on the excerpt section of bobbyowsinski.com.