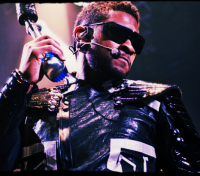 Philadelphia-based songwriter Daniel Marino has been awarded $44.35 million in his lawsuit over Usher's 2004 song “Bad Girl” from the hit album "Confessions."  Marino claimed that he was a an uncredited co-writer, with the majority of the song based on his 2002 track “Club Girl” including the “guitar hook, tempo and chord progression.”

Marino filed a lawsuit in 2011 against Usher and 20 other defendants for “breach of contract, fraud, and other accusations” but all cases were dismissed except for the current court case, according to Associated Press. Marino’s former co-writer William Guice was ordered by a jury to pay Marino $17.35 million in compensatory damages and $20.25 million in punitive damages last week at the Philadelphia Court of Common Please. Destro Music Productions, owned by co-defendant Dante Barton, was ordered to fork over $17.35 million. Marino now owns a third of the song’s ownership rights, according to the Philadelphia Inquirer.

“For seven years, against all odds, we believed in our client and his claims,” Marino’s attorney Francis Malofiy, who has been repping the estate for Spirit’s Randy Wolfe in the Led Zeppelin “Stairway To Heaven” controversy, told the Inquirer.