5 Copyright Cases Every Songwriter Should Be Aware Of 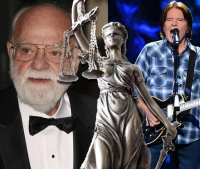 Following the 2016's landmark "Blurred Lines" case, the music business has seen an uptick in the number of copyright infringement cases it's been hit with. Still, the industry is no stranger to legal squabbles. Here we look at five iconic music copyright cases which every songwriter should know about.

After the watershed “Blurred Lines” case in 2016, there has been an influx of music copyright infringement cases bringing songwriters, performers, and publishers to court. More than ever, it is crucial for any modern musician to have a basic knowledge of music copyright law, and at least a grasp of the legal avenues that exist when using another artist’s material. whether by covering or sampling.

But “Blurred Lines” was hardly the first copyright case to rattle Lady Justice’s scale. Here are five important music copyright infringement cases that every songwriter should know about.

Ira Arnstein, the minor early 20th century composer with religious leanings, believed that Cole Porter, a very influential composer and songsmith, enlisted spies to steal his songs and sued him for plagiarism of multiple works.

He alleged that Porter had used Arnstein’s “The Lord Is My Shepherd” as the basis for his “Begin the Beguine” (premiered in the Broadway musical Jubilee), as well as “A Modern Messiah” for his “Don’t Fence Me In” (originally written for Adios, Argentina), and “A Mother’s Prayer” for his popular song, “My Heart Belongs to Daddy” (premiered in Leave It to Me!).

Though this case ruled in Porter’s favor and spies were found to not, in fact, be in the equation, the decision set a major precedent for music copyright cases. First of all, this was the first of Arnstein’s several legal battles that had been taken seriously. He was somewhat of a “full-time plaintiff,” and by 1946 had already unsuccessfully attempted to sue ASCAP, BMI, and Twentieth Century Fox Film. Although he did ultimately lose his case against Porter, this case helped establish the two-pronged test to determine copyright infringement that is still used today: Courts must determine if the defendant copied the plaintiff’s work, and whether this copying constitutes substantial similarity between the two works.

In 1972, John Fogerty left Creedence Clearwater Revival and their label, Fantasy Records. After he released his hit solo album Centerfield (1985), label head Saul Zaentz of Fantasy Records sued Fogerty for plagiarizing himself. Zaentz claimed that the single “The Old Man Down the Road” infringed upon “Run Through the Jungle,” a song that he had originally recorded with CCR under contract with Fantasy Records in 1970. Though he was not found guilty, it’s pretty novel that Fogerty was sued for sounding too much like himself!

Here’s a handy comparison of the two songs. The song switches at 0:42 for reference. What do you think — too close for comfort?

After this case, Fogerty filed a countersuit against Zaentz to cover his attorneys’ fees. This case went to the Supreme Court in Fogerty v. Fantasy, Inc. (1993), which ruled that Fogerty would receive recompense without even having to prove that the original case was trivial.

Following one of the first major hip-hop settlements between De La Soul and The Turtles in 1989, Biz Markie was sued over his hit single “Alone Again.” Markie’s song samples the piano chords from Gilbert O’Sullivan’s “Alone Again (Naturally)” and uses the same lyrical hook. Markie’s record label initially tried to get the rights to “Alone Again (Naturally),” but when O’Sullivan refused, the label released the song anyway. Markie was in turn found guilty of copyright infringement.

In this landmark case, Judge Kevin Thomas Duffy ruled that Warner Brothers had to stop all distribution of Biz Markie’s song and album, and that Markie owed O’Sullivan $250,000 in damages. Judge Duffy began his opinion with the biblical admonition, “Thou shalt not steal,” and referred the case to criminal court on the grounds of theft (Markie was not charged this time).

Once hip-hop artists started making money, they were met by an influx of copyright suits. Such harsh court decisions and the constant threat of legal suits inhibited the creativity of hip-hop artists. This case reflects the legal reaction to hip-hop: in the eyes of the court, hip-hop and sampling were not art, but pure theft. Courts labeled samplers criminals, and the art form itself was forced to change.

In 2013, Marvin Gaye’s estate sued Robin Thicke, T.I. (Clifford Joseph Harris, Jr.), and Pharrell Williams, claiming that their smash hit “Blurred Lines” stole from Gaye’s 1977 song “Got to Give It Up,” as well as from Funkadelic’s “Sexy Ways” from 1974. Though Thicke and Pharrell were found guilty as songwriters, there are no proven musical similarities between the two songs. The jury was influenced by the “feel” and “groove” of the two works, components that are not protected under copyright law. Many musicians and legal experts were concerned that this decision set a dangerous legal precedent and blurred the lines of what musical elements are protectable.

Here’s our take on the case from back in 2015. Thicke eventually appealed and lost.

Megastar Ed Sheeran is no stranger to music copyright infringement cases, and unfortunately, neither is his plaintiff. In the latest claim, “the battle of the Eds,” Sheeran is being accused of copying, yet again, Marvin Gaye’s “Let’s Get It On” in “Thinking Out Loud.” He is currently being sued by two different parties: Ed Townsend’s estate (co-writer of “Let’s Get It On”) and Structured Asset Sales, who claim to own a part of Gaye’s song.

The most significant similarities are the chord progressions and the instrumentation, neither of which is protectable under copyright law. While Sheeran may have been inspired by Gaye, these similarities are insignificant, and these cases should be thrown out — a perspective echoed by experts in the field.

If you’re a songwriter interested in the legal grey areas of using other people’s music, check out our recent article on the basics of legally covering and sampling songs.