With voter apathy an omnipresent concern at this particular moment in time, artist manager Emily White has partnered with a variety of artists to launch the #iVoted initiative which rewards those participating in the democratic process with free concert tickets.

“If you are bored and disgusted by politics and don’t bother to vote, you are in effect voting for the entrenched Establishments of the two major parties, who please rest assured are not dumb, and who are keenly aware that it is in their interests to keep you disgusted and bored and cynical and to give you every possible psychological reason to stay at home doing one-hitters and watching MTV on primary day. By all means stay home if you want, but don’t bullshit yourself that you’re not voting. In reality, there is no such thing as not voting: you either vote by voting, or you vote by staying home and tacitly doubling the value of some Diehard’s vote.” – David Foster Wallace, Rolling Stone, April 13, 2000

As this week’s New York Magazine article “12 Young People on Why They Probably Won’t Vote” reminded us for the umpteenth time, voter apathy is very real and very prevalent in a large section of the 18-29 demographic. Over the years there have been a variety of pro-voting programs aimed at increasing the number of young adults headed to the voting booth and we here at NoiseTrade are incredibly excited about a brand new one that has joined the ranks this year.

#iVoted is a new voting initiative started by entrepreneur and artist manager Emily White that has partnered with Drive-By Truckers, Iron & Wine, Playboi Carti, boygenius, Alynda Segarra (Hurray for the Riff Raff), Jim James (My Morning Jacket), Maggie Rogers, Superchunk, Good Charlotte, and a wide variety of other artists to offer a batch of free tickets to select concerts taking place on Election Day (November 6, 2018). To be eligible, all you have to do is take a photo of yourself outside of your polling place and show it to the door person at the participating venue. Each concert will offer between 50-200 tickets (depending on the venue) and for events that are already free, your photo can be used for a free drink.

With over 100 participating concerts taking place across 32 states and in Washington, D.C. (the entire lists of artists and venues can be found here: https://www.ivotedconcerts.com/shows/), there are a variety of artists for all genres tastes, as well as a few participating comedy shows like Reggie Watts at The Hi-Hat in Los Angeles, CA and Nikki Glaser at Warsaw in Brooklyn, NY. For many of the artists, the decision to participate in the initiative has been a very personal one that they have enthusiastically taken on.

“Hands down, Drive-By Truckers – who are playing their hometown market of Birmingham on Election Night – as well as Living Colour, Fishbone, and Brass Against the Machine have been the most active and engaged,” states White. It seems the enthusiasm of the bands has transferred to their audiences as well, helping the entire #iVoted initiative build into an incredible swell. According to White, “It’s been a blast to see some of the artists’ fan bases come alive. At the same time, #iVoted has exploded in a good way and the power of any of the artists performing at #iVoted shows being able to push the concept out on their socials is yielding very strong engagement with their audiences.” 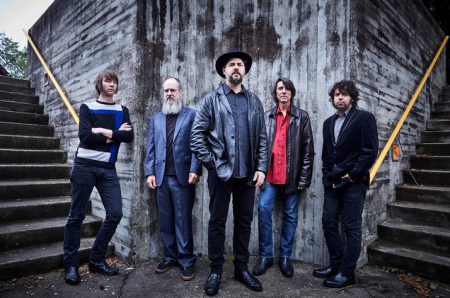 White started getting the idea for a voter turnout initiative in the aftermath of the 2016 election: “I’m originally from Wisconsin, where the 2016 presidential election was decided by 22,748 votes. I had simultaneously read that voter turnout was down amongst young people in Milwaukee. I thought to myself ‘22,748 people is an arena. Why don’t we throw a sick concert in Milwaukee and tie in voting?’ I then realized that if we took the concept national, it would have that much more impact.” After connecting with Mike Luba of Madison House and Pat Sansone of Wilco, the #iVoted initiative was created.

With her successful background as an artist manager and tour manager, White started connecting with as many artists, venues, and promoters as she could: “I was schooled at a management company in the jam scene, so I’ve always had strong relationships with the live sector of the industry. I started reaching out with the idea last year and got almost instant confirmations from Live Nation NYC, C3 in Austin, and Brooklyn Bowl before they even knew who would be playing their rooms. I knew that having even one of these great promoters on board would allow us to leverage the concept to others and that’s exactly what happened.”

For this year’s triple-digit collection of concerts, the process is incredibly easy. Fans can take a picture of themselves outside of their polling place and show the photo to the door person at participating venues for entry. Each show has a batch of between 50-200 tickets for the initiative (quantities are detailed on the show list webpage: https://www.ivotedconcerts.com/shows/). Early voters can participate as well by simply posting a photo of proof (either your polling place or your mail-in ballot) on Instagram and tagging the venue and @ivotedconcerts to be entered into a drawing for their local show. Entries will be collected by #iVoted and announced the same day.

With as much excitement as has already been generated for this year’s concerts, White’s long term desire is to make the #iVoted initiative a fixture for future natural elections that can be driven by a variety of events and even more elongated timeframes. As White sees it: “This initiative has exploded in a good way far beyond the capacity that I and my wonderful intern Zachary Rusher are capable of as two humans. We now have promoters asking if fans can get in with their selfie from outside of their polling places to shows through December. Thus, do we make this a year round thing? Also, I definitely want to get this into other spaces, such as NBA games. We’ve even had colleagues reach out from Canada and France wanting to do #iVoted in their countries. The sky is really the limit. We’re growing our board with some incredible minds, in particular economist Jon Gruber and data scientist Talia Borodin, who are doing an academic study on our work to hopefully show that we have increased voter turnout.”

Along with participating in the actual concerts, anyone who wants to help the #iVoted efforts can do so by telling at least one industry person they know or by making a tax-deductible financial contribution to #iVoted’s work here.