Looking Back On 15 Years Of Bandzoogle [Chris Vinson]

[UPDATED] Bandzoogle is celebrating 15 years, a lifetime in both in music and tech. The website and marketing platform continues to thrive by providing a product that every musician needs, constantly improving it and charging a fair price. But Bandzoogle's not-so-secret ingredient is founder Chris Vinson and his team of musicians and music lovers who wake up every morning wanting to make life better for artists. Here, Chris shares his journey.

By Chris Vinson, Founder of Bandzoogle

Bandzoogle, like anything worthwhile, was created by a series of gambles.

Luckily, as a musician I learned to take risks. Planning a tour. Making an album. Choosing a single. Investing in merch. Signing with a record label. These experiences made the jump to starting a new business easy.

When our band broke up in 2003, like many rock bands do, I got lucky. The label liked the website I had built for our band, and hired me to build websites for their artists. It didn’t take long before I realized that having to update dozens of artist websites would be challenging, so I dreamt up a system for artists and managers to update their own websites. But I had no idea how to build it.

So, I spent a day looking for a coding book at my local bookstore. I chose "Coldfusion for Dummies" because it seemed like the easiest language to learn (a terrible choice, in retrospect). I dove in and and enjoyed the process. It reminded me of music theory – investing hundreds of hours to learn a complex framework to accomplish a creative task.

After 6 months of hacking, the first version of Bandzoogle was complete. It was very limited, but it worked. But I quickly realized that I couldn't launch it without servers, and that meant money.

The record label offered a small amount of seed money in exchange for 50% of the business, as long as I kept my day job. I jumped on it. 50% of something was better than nothing, and who needs sleep anyway?

I spent the next six months working around the clock. Building websites for the label during the day, coding Bandzoogle at night and weekends. Bandzoogle officially went online in November, 2003. 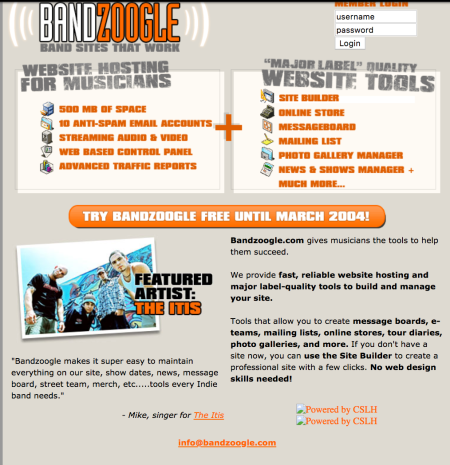 The original Bandzoogle webpage from 2003

I took a gamble to stick it out. MySpace was very limited, and required users to customize their pages via HTML code. While we couldn't match their social platform, I knew that Bandzoogle was easier to use, and bands would own the end result. I doubled down on building out features to differentiate Bandzoogle.

Despite the competition, our membership grew. We didn’t have a budget to market Bandzoogle back then, but our members were telling their friends about us. That kind of word-of-mouth marketing was key to our growth the first few years.

The company also grew with its first employees. Keith (the guitarist from our band) joined to handle support, and Eli became our first developer. The company hit profitability almost exactly a year after it launched.

I knew that Bandzoogle had the potential to grow into a great business — and that I had to buy out the record label's 50% share. Surprisingly, they were very generous in giving me an option to do this.

This was a turning point in Bandzoogle's history. Without this deal, Bandzoogle would never have grown to where it is today. Thanks to Donald, Oko, and Matt at DKD for making Bandzoogle possible.

But this came with a new problem… I needed money, again. This time a big chunk to buy them out.

The biggest gamble of all… I asked my retired parents to borrow most of their savings to buy Bandzoogle from the label. Amazingly, they said yes. Looking back, it was a crazy ask. At the time I figured that if it didn't work out, I could work for a few decades to pay it back. Lucky for me, it paid off (it paid off for them too…)

The next 10 years were both a blur and a steady progression. The product improved in leaps and bounds, and our team grew to support it. But there were many challenges.

A big one: our dev team, led by Colin, Jorge, and Dave, had the unenviable task of re-writing Bandzoogle from scratch in a modern language (Ruby on Rails to replace Coldfusion). Not to mention we also had to migrate thousands of live member sites without major disruption.

We launched the new platform in November 2013, with only minor hiccups, an amazing technical accomplishment. With the new code base, we were able to release new features and modern themes faster than ever.

During these years, venture capital firms constantly sent offers to "accelerate" our growth with investment. But I wanted Bandzoogle to grow sustainably, on our own terms. I decided not to take outside investment. It felt like a big gamble at the time because our competitors had deep pockets, and were spending aggressively to advertise against us. In retrospect, it is clear that it was the right path for us.

My final gamble came this year when I decided to step back from daily operations. This was both easy and hard. 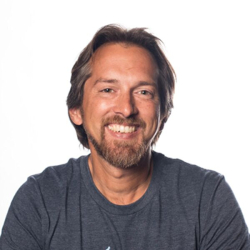 Easy, because I have confidence in every member of our team to handle the challenges ahead. And confidence that our new CEO Stacey will successfully lead the team, sustain Bandzoogle’s culture, and grow the business.

Hard, because after 15 years I need to refrain from my routine of daily check-ins and emails. I'm learning (slowly) to not focus on the details, but on the 10,000 foot view.

Today, 36,000 artists trust Bandzoogle to power their websites and promote their music to the world. A number I would never have believed possible when we launched 15 years ago. Moreover, Bandzoogle is a sustainably growing business with an amazing team. We're in a great place, and I'm looking forward to its next chapter.