Pharrell, Decidedly Un-Happy About Trump’s Use Of His Song, May Actually Have A Case

No election cycle is complete without a politician using a song at a rally to the consternation of its creator, and while blanket performance licenses usually prevent the artist from doing much other than complaining, Trump's use of the song "Happy" at a recent rally could result in some very real legal blowback from Pharrell Williams.

It happens basically every election cycle: at a political event or rally a politician that a musician dislikes uses one of that musician's songs to get the crowd excited. The musician gets upset and speaks out about it, and maybe even sends a legal threat letter. We've written about this many, many times before going back many years. And in most cases, the complaints are bullshit. Most event venues and and most competent campaigns have the appropriate blanket performance licenses from BMI and/or ASCAP, and that allows them to play whatever they want at the events, and the musicians really can't do much about it (other than complain publicly, which makes lots of news — and which is why we're still amazed that campaigns don't first check to make sure they play music of musicians who support them).

But… there are some rare exceptions to this general rule, and not only have we found one, but it involves quite an impressive legal threat. It appears that on Saturday evening, just hours after 11 people were murdered in Pittsburgh, President Donald Trump decided to still hold a political rally, because when the choice is put in front of Trump between "appropriate silence" and "pointless spectacle that makes Trump feel worshiped" he will always choose the latter*. But at this highly inappropriate rally, Trump apparently played Pharrell Williams' incredibly upbeat earworm of a pop song "Happy."

* Hey, I get that some of you are going to be upset about this line, and will come up with all sorts of bullshit rationalizing and excuses for why the rally was appropriate, and all I will say to you is: make better life choices, and maybe, take a serious look at yourself in the mirror and ask "what the fuck happened to me?"

And, yes, such a song on such a day at such a stupid rally certainly feels inappropriate to anyone with even the slightest sense of decorum or empathy. But, for Williams, it went a bit further. Because, as reporter Eriq Gardner notes, unlike most popular musicians, Pharrell ditched ASCAP four years ago and moved all his music to Irving Azoff's "Global Music Rights" organization (GMR). GMR is kind of sketchy, and feels like a giant shakedown play for internet sites, but, ignoring that, what is known is that neither the venue nor the campaign have a license from GMR.

And that enabled Pharrell's lawyers to send quite the letter to President Trump. It doesn't just talk about the infringement, but the sheer insanity of playing such a song on such a day. 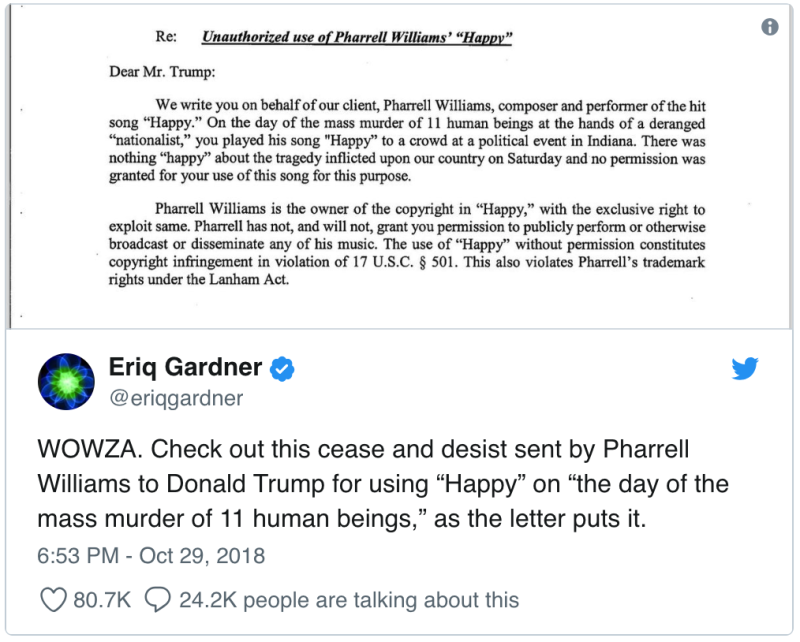 We write you on behalf of our client, Pharrell Williams, composer and performer of the hit song "Happy." On the day of the mass murder of 11 human beings at the hands of a deranged "nationalist," you played his song "Happy" to a crowd at a political event in Indiana. There was nothing "happy" about the tragedy inflicted on our country on Saturday and no permission was granted for your use of this song for this purpose.

Pharrell Williams is the owner of the copyright in "Happy," with the exclusive right to exploit same. Pharrell has not, and will not, grant you permission to publicly perform or otherwise broadcast or disseminate any of his music. The use of "Happy" without permission constitutes copyright infringement in violation of 17 U.S.C. § 501. This also violates Pharrell's trademark rights under the Lanham Act.

I guess it's possible that Trump could claim fair use in the use of the song, but I doubt that would fly. The trademark claim seems incredibly unlikely, but if the lawyers actually pursued the copyright claim, it seems like they'd have a chance to make it stick.