An Exploration Of Co-publishing, Sub-publishing And Administration Agreements [Pt. 2]

In this second in a multi-part series exploring some of the less well known publishing agreements in the music industry, Justin Jacobson delves into the nitty gritty of sub-publishing agreement and what its implications are for an artist.

Guest post by Justin Jacobson, Esq. of the TuneCore Blog

This is the second in a two-part installment reviewing different types of publishing agreements. To catch up on Part 1, click here.

In Part 1, we examined administration agreements and began looking at co-publishing deals. We will now look at additional matters related to co-publishing arrangements as well as a look into sub-publishing.

This type of arrangement is often used when one publisher is far better equipped to handle worldwide exploitation and administration of a song than the other. This also enables the administering publisher to control the third-party uses of the composition due to its exclusive right to negotiate agreements and enter into licenses for itself and on behalf of the other publishers. This also permits the institution of a strategy for the exploitation and promotion of the composition.

While, the non-administering publisher does not have the power to issue licenses, there are some instances that may require this publisher’s approval. Some may include any advertising and promotion expenses incurred by the administering publishing company on behalf of the track, the usage of the song in a radio or television commercial, any foreign lyric adaptations or translations of the original composition, any film synchronization uses of it, any mechanical licenses issued at less than the full statutory rate, and any use of the song as a sample by another party.

In a joint administration arrangement, each publisher has the right to administer the full musical composition and to issue non-exclusive licenses for the composition. Under this type of agreement, each publisher has the right to negotiate agreements as well as collect and account for revenues earned from the entire song. Generally, this situation is only feasible if both publishing companies are equally capable of administering and exploiting the song globally. 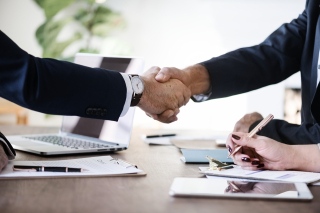 These situations are typically easier to navigate, as a licensee does not need to enter into two separate license agreements with two different publishers to secure the right to use one song for one specified use. Instead, they can just engage one of the co-owners of the work for a non-exclusive license for the entire piece subject to this publishing company accounting to the other for the earned funds.

Another variation of this arrangement is a limited joint administration. In that instance, each publisher has the right to administer only its interest in the song and to issue exclusive or non-exclusive licenses only for its interest in the song as opposed to being able to issue a non-exclusive license for the entire composition. That could mean that if a publisher only owns a 50% interest in a song, it could issue a license only for its 50% interest. Also, neither publisher needs to account to the other one unless one receives the other’s share of income in error as each party is only able to license and earn income from their share.

This means that the third-party must secure a separate license from all of the other publishers to acquire the full rights to the entire song for a particular use.

Whether a songwriter enters into an administration agreement or a co-publishing “deal,” the writer may also enter into a sub-publishing arrangement. Such arrangement can exist with its current exclusive administering party, one of the co-publishers, or with an entirely different entity unrelated to the other parties.

A sub-publishing arrangement exists where a writer and/or a publishing or administrating entity enters into an agreement with a foreign publishing company, the sub-publisher, to exploit their compositions in a different country or countries. This means that the sub-publishing company has the right to administer, license and exploit the owner’s songs in countries where the other parties generally do not conduct business. This agreement may apply to one or more separate songs, or a writer’s entire catalog.

A sub-publisher usually charges an administration fee, which is generally between 10-50% of monies earned. In addition, a sub-publisher may also pay the owner an advance payment which is recoupable against the royalties earned. The amount of the advance payment depends upon the size and importance of the catalog and whether a song is currently a hit in the United States or some other territory.

Generally, a multinational company, such as Warner Music Group, can often pay a larger advance payment than a group of separate independent companies. This is due to the multinational company cross-collateralizing the income streams and recouping the advanced amount against all royalties generated from all the licensed countries as well as lowering their operational overhead by dealing with all foreign exploitation and accounting in a central office. This helps the larger publisher reduce the time and expense of auditing and servicing the catalog and communicating with various different, independent foreign sub-publishers.

Additionally, one of the rights typically granted to the foreign sub-publisher is the ability to create foreign lyric adaptations or translations of the original song. This enables the sub-publisher to create “cover” records with the original composition recorded in the licensed territory’s native language. In these situations, the sub-publisher is usually entitled to receive a greater share of mechanical royalties for sales of the translated “cover” record in the licensed territory.

One last consideration when entering into a sub-publishing deal is how payments are calculated. Generally, an artist should aim to have all their payments made “at source.” This means that royalties earned through the sub-publishing agreement are computed at the source, which is having the percentage based on earnings in the country it was earned; otherwise, the songwriter’s U.S. publisher will take a percentage of the foreign royalties earned in addition to the foreign sub-publisher receiving their owed compensation.

Overall, while many songwriters and producers enter into the standard songwriter-publishing agreement that enables the publishing company to only collect publishing royalties in the United States, there are other arrangements that may be more appropriate or more beneficial to the artist, such as an administration deal or a sub-publishing agreement.

These contractual relationships enable the songwriter to earn royalties from territories outside its traditional business channel as well as potentially entering into an administration relationship whereby the songwriter has complete control over the licensing of its work and the administrator merely handles the paperwork and accounting associated with the recordings.

Each individual has different requirements, so it is best to consult with a qualified attorney or professional when determining the best course of action for a particular musician.

This article is not intended as legal advice, as an attorney specializing in the field should be consulted.

Justin Jacobson is an entertainment and media attorney for The Jacobson Firm, P.C. in New York City. He also runs Label 55 and taught music business at the Institute of Audio Research.