Radio’s Best Defense Against The Future

As time continues its relentless march onward, a legacy industry like radio must do everything it can to embracing emerging tech and dive headlong into the future.

“You have to always be leaning into the future. If you’re leaning away from the future, the future is gonna win, every time.”

And in just 23 words, the enigmatic head of Amazon gives you his business plan, operating philosophy, and his company's raison d'être.  In many ways, it's a schematic for radio broadcasters to embrace “what's next?” in order to survive and thrive in an uncertain future.  Bezos sees the future as a challenge.

While you could make the case that few have benefited from the future as much as Amazon, they have also had their share of absolute fails.   The Fire Phone in 2014 is just one of many forays into the future that never produced.   You can't even buy this collector's item on the Amazon site, but there are plenty of cheap ones still on sale on eBay.

I am not a business history buff, but it's impossible to imagine what the agrarian world of America experienced when the Industrial Revolution exploded in the mid-1800s.  In later years, the advent of the assembly line, electricity, transcontinental travel, and mass production had to have the same nerve-shattering effect on this country as the Technology Revolution is having on us right now.

And you can bet that chief executives – or the captains of industry as they were called back then – were profoundly tested for their ability to transform their companies, see around corners, imagine what the world would look like, and provide the type of leadership that instilled confidence in investors as well as their employees.

The auto industry – which caused so much angst to the horse and buggy business – is now finding the same forces at play.  As smart mobility and 5G loom on the horizon, more Americans will simply not pay $40,000 for their own vehicles – especially cars, as Ford and GM have said they will dramatically reduce production.  The painful announcement this week that GM will be closing a number of its plants is proof positive of the disruption all around us.

Not even a Presidential edict can stop the inexorable rush to an uncertain future as Mary Barra and the other auto execs play defense against the future. And “leaning forward” is a much more challenging strategy for an old-line company like General Motors, as well as Ford, VW, Toyota, and the other auto giants.

Interestingly, it's not just legacy industries enduring “future shock” as Alvin Toffler referred to it in his book of the same name nearly a half century ago.  Mark Zuckerberg – who we highlighted in Monday's blog post – is facing many of these same challenges as his workforce is shaken by Facebook's turbulence and growing pains.   Whether you're David Field, Mary Barra, or Mark Zuckerberg, the future's so cloudy you gotta have radar – with apologies to Timbuk 3. 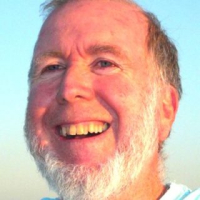 In an essay to celebrate Wired's 25th anniversary called “How the Internet Gave All of Us Superpowers,” founding executive editor Kevin Kelly declared that even though it feels like the web has been with us forever, it's still early days:

“And even today, the main event has barely started.”

As he charts the rise of the Internet as a revolution where “ordinary people” on Wikipedia, YouTube, and Facebook are in charge of content creation and sharing, you get the feeling we're only feeling the initial impacts of the world being connected.

And that's why I have a special feeling about that powerful wave of technology that makes going to CES so special every year.  As I explain to “CES virgins,” it's not about the hot new gadget.  There are too many of them to count.

It is about standing in the middle of the Las Vegas Convention Center (or C-Space or Eureka Park), taking a deep breath, and feeling the future of innovation and change all around you.

You can literally taste, see, and smell the future.

And it's not that difficult to connect a few dots to understand just how broadcasters can and should be confronting it. 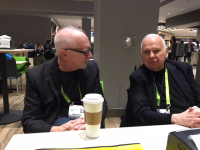 After escorting scores of radio broadcasters through the maze of innovation and change at CES these past few years, I still come back to the guy who was attending this event decades before I even knew it existed  – Jerry Lee.  When I asked him why he became a CES P1 starting a half century ago, his response was simple and obvious:

“I don't want to miss the future.”

These days, the future is turning up in some unlikely places – even on late night TV.  Recently, Jimmy Fallon has turned his attention to robotics – and how our lives will be altered (improved?) by this technology.  We're not far away from Rosie the Robot who became a fixture on “The Jetsons.”

As we've discussed in recent blog posts, Artificial Intelligence is rapidly making its way to the TV news set as the Chinese experiment with robotic anchors.  And then there's the impact of robots in radio studios.

And I'm not talking about voicetracking, but the use of robots to efficiently replace humans as “talent.”  We can get into a philosophical wrestling match about the ethics and wisdom of this idea, but it's already happening.  In a recent story in RadioWorld – “Making Local Radio That Isn't” – Dave Beasing took a deep dive into top-down efficiencies in radio companies since the elimination of the “Main Studio Rule.” 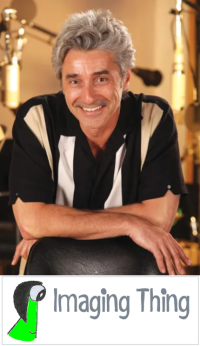 But Dave's story moved into the automated world of AI, centralized studios, and digital libraries and imaging services.  He interviewed Gary Thompson, creator of ImagingThing.com, a company that cranks out production for radio or podcasters, quickly, efficiently, and inexpensively by aggregating effects, liners, and work parts.”

Thompson explained that assembly is so simple, “I realized a monkey — or a computer — could do that part.”

And when you start seeing robots show up on “The Tonight Show” and “60 Minutes,” it's time to start thinking about our future with droids and bots, and how our industry may be impacted.  Gort, Robbie, Rosie, R2-D2, and Data were just the beginning.

Here's a look at Jimmy Fallon's foray into robots, highlighted by a duet who sings with “Sophia.”  The technology was developed by Hanson Robotics.  It is worth watching the entire video, but if you're short on time, fast-forward to the 4:26 mark:

Robotics will be on the agenda for our two CES tours in early January – along with Artificial Intelligence, autonomous cars, smart speakers and voice technologies, as well as other innovations that will impact and affect broadcast radio in 2019 – and beyond.

To plan for the future, you have to see it and understand it.  That's why executives from Entercom, Beasley, Hubbard, Westwood One, Emmis, the NAB, Salem, and other forward-thinking companies have attended our CES tours in years past – and now make this event a fixture on their January calendars.

Our first tour is sold out.  Our second tour (on Thursday morning, January 11) has two slots left.  We'd love to have you join us, and introduce you to the future.

And make sure you bring comfortable shoes…and a pair of shades.

Thanks to Randy Kabrich & Dave Beasing for the inspiration.

Interested in checking out CES in January?  Drop me a line.