[Op-Ed] As the debate over Article 13 rages on, the recent launch of YouTube's upload filter, designed to sift out illicit uploads and which cost the platform about $100 million, has, according to mIke Masnick,  shown what a disaster the piece of legislation will be for the internet as a whole.

The entire Article 13 debate is a weird one. It appears that both the recording industry and the film industry are going for broke on this one. The lobbying on this started a few years back, with the rather clever but completely bogus idea of the "value gap."

In case you haven't followed it, the idea of the "value gap" is that (1) YouTube pays less to musicians record labels than Spotify and Apple Music do for streams. (2) YouTube's general purpose video hosting platform is protected by intermediary protection laws (DMCA 512 in the US, Article 14 of the E-Commerce Directive in the EU) allowing users to upload whatever they want, and YouTube only has to takedown infringing works upon notice. (3) Services like Spotify and Apple Music license all their works. (4) The "lower rates" that YouTube pays must be the result of the safe harbor, and the difference in payments is the "value gap." Article 13, then, is supposed to "fix" the value gap by completely removing any notice-and-takedown safe harbor for copyright-covered works.

Of course, almost all of this is bullshit. YouTube is used in very, very different ways from Spotify and Apple Music. While YouTube does have a competing music streaming service that is similar to Spotify/Apple Music, its payment rates there are equivalent. But on the general open platform, the rates are different. This is not because of the safe harbors, but because people use the platforms very, very differently. People use Spotify/Apple Music almost like radio — to put on music that is constantly streaming playlists of songs. YouTube has all sorts of content, most of it not music, and while some may use it as a radio-style experience, that is fairly rare. And the recording industry has always received different rates based on different platforms and different kinds of usage.

Meanwhile, Article 13 will do nothing to solve the "problem" that all the "value gap" people keep insisting is a problem. That's because Article 13 will basically require an upload filter that will spot infringing works and block them before they get on the site (there's more to it than that, but that's a basic approximation of what the law will require in practice). Basically the only company that has actually done this already… is YouTube! YouTube has its ContentID system, which it has spent over $100 million developing, and which can block uploads and pull down content.

And… let's take a look at just how much damage such a system causes. Remember, YouTube has spent more on its filter than anyone else (by far) and it is considered easily the most sophisticated and advanced such filter.

Last week, I saw musician Dan Bull (who wrote/performed the Techdirt podcast theme song) complaining that he had he had received a copyright claim on a video that was his own work, and from someone whose work was not in the video at all:

The issue, apparently, was that both Dan Bull and the claimant — another independent rap artist — had used used the same instrumental, that was available on a "non-exclusive" basis, meaning lots of artists could use it. That indie artist then tried to monetize their own work, but ContentID found anyone using the same properly licensed instrumental and gave people a strike.

And, even the way in which YouTube communicated with Dan Bull was ridiculous:

If you can't see that, YouTube told him that "your copyright dispute is currently being reviewed by the copyright owner," to which Dan Bull rightly pointed out that's bullshit, because it's not "the copyright holder" who is reviewing it.

A day later, someone else pointed me to a nearly identical situation with another super popular YouTube musician, The Fat Rat. A third party claimed copyright on his song and YouTube rejected The Fat Rat's dispute. 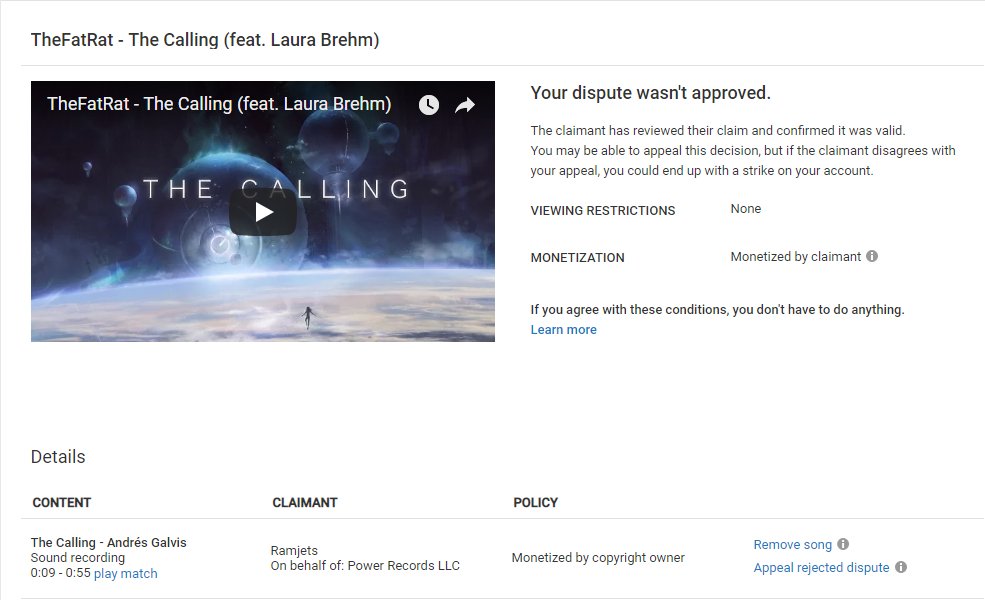 ARE YOU FUCKING KIDDING ME @YouTube ?!?! THIS IS MY FUCKING SONG!!! @TeamYouTube @youtubemusic @YTCreators

And, then, soon after that, he posts a similar frustration to Dan Bull when YouTube incorrectly tells him that this is in the hands of "the content owner," when that's not whose hands its in at all: 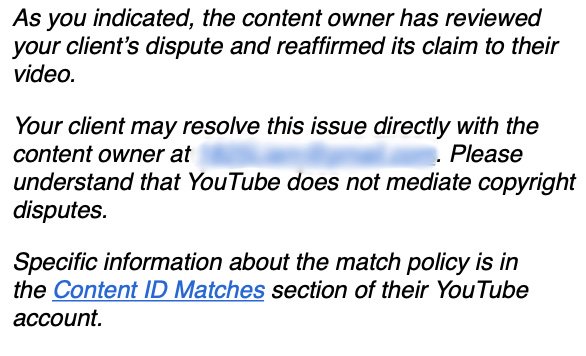 UPDATE: I'm sure I'll get this sorted out with a lawyer but @YouTube's attitude here is mind-blowing. A guy claims my video, @YouTube gives the monetisation to him but then tells me it's not their business. Also notice they call HIM "content owner"! IT'S #MYFUCKINGSONG GODDAMIT

That's just two examples of YouTube's $100 million upload filter system claiming copyright on music incorrectly that I randomly came across in just the past few days. But it's not hard to find tons of other examples of this happening. Here's someone pointing out that each and every one of his videos is being copyright claimed one after another: 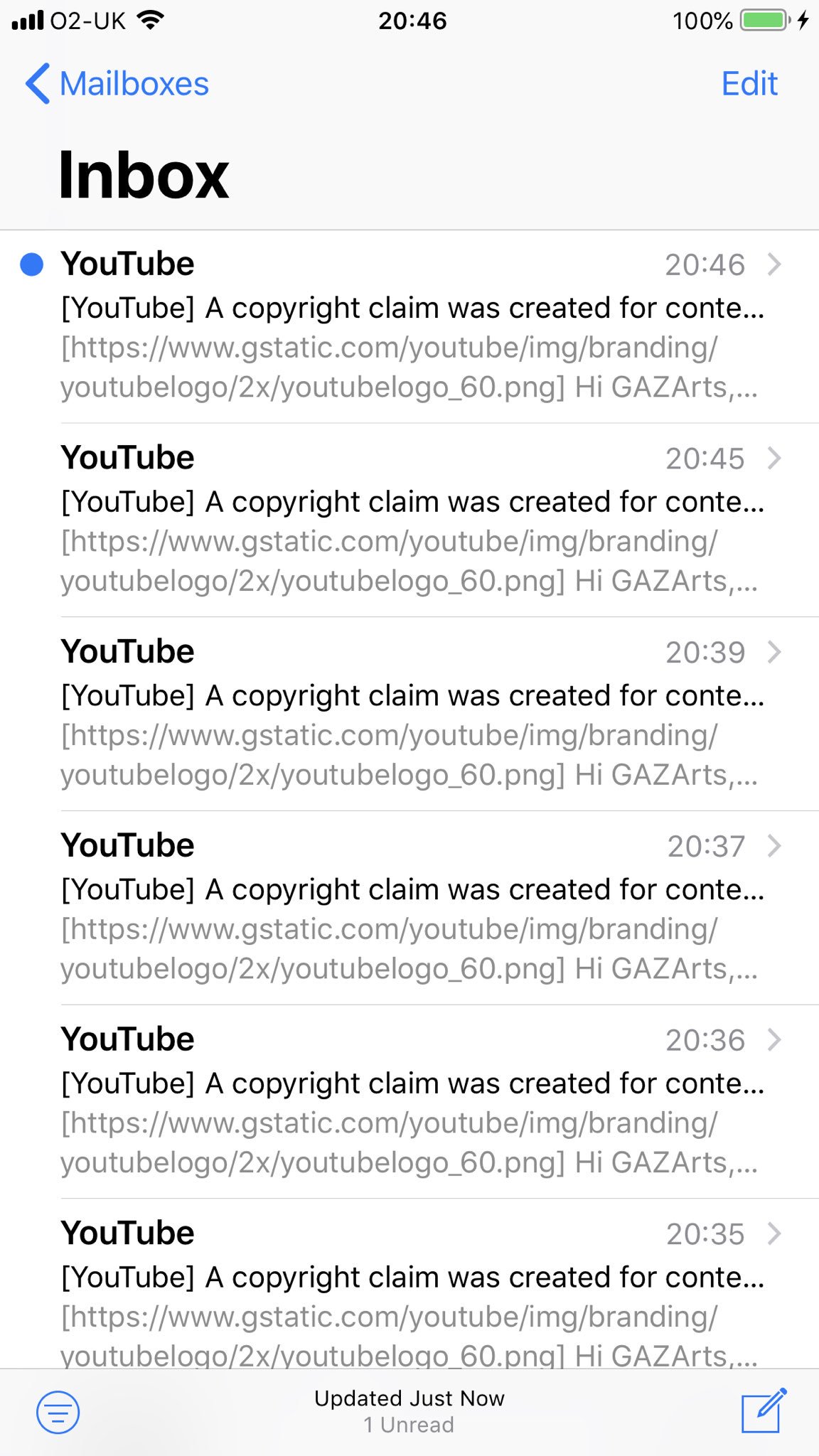 Does anyone have any info on who #Studio71_2_1 are and why they’re going through my #YouTube videos one by one issuing copyright claims? The videos are all very different to one another so it doesn’t make a lot of sense.

And that seems to happen quite often too. Here's an incredible video from a popular YouTuber explaining in great detail how every single one of his videos had been copyright claimed:

In case you can't watch that, basically the guy legally licensed some music to be used as his outro music (paid the musician $50 for it, as per their request, even though the musician later claims anyone is free to use the music, so long as they include a Spotify link to his stuff). But, then a bunch of companies get involved, including Distrokid and Audiam, who claimed basically every single one of his videos, and his email conversation with both companies is maddening, as they don't seem to understand or care about what's going on — and basically tell him that every time this happens he would need to email them again and hope they remove the claims, but they refuse to whitelist his account.

And here's another person highlighting that all 3,000+ of his videos just got a ContentID copyright claim:

And here's someone who got a copyright claim on a private, unlisted video that the uploader needed for a class assignment: 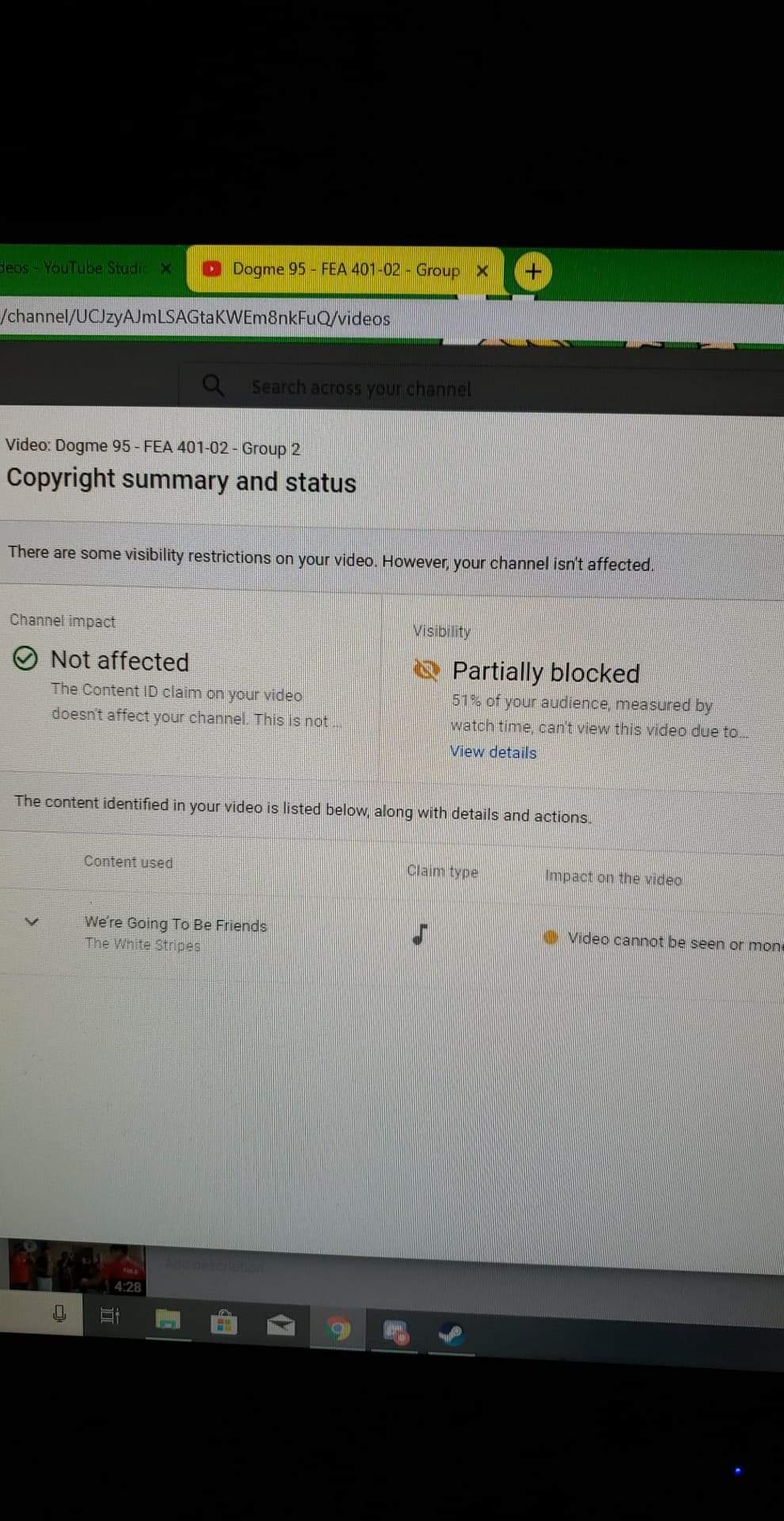 Thanks @YouTube for blocking my privated, unlisted video that I needed to upload for class in order for my professor to view. Meanwhile I pay for YoutubePremium only to be copyright striked on this group assignment…thanks a lot.

Those are just the first few results that pop up for a quick search on Twitter of "Youtube" and "copyright." There are lots more. Indeed, there's an interesting one from the super popular YouTuber @Jack_Septic_Eye (Sean William McLoughlin) who explains that he accidentally caused a ton of bogus copyright claims by switching YouTube networks:

Switched youtube networks today and in the change over a bunch of people have gotten falsely copyright claimed on my behalf. This is obviously a mistake and i’ve talked to them about reverting it. Sorry to anyone affected by it and hopefully will clear up in a couple of days

In short, the $100 million ContentID system is a total fucking mess.

Bring that back around to Article 13, which will create massive fines should YouTube fail to catch any copyright-covered works with (per the industry's wishes) no safe harbors for platforms, and this problem will only get significantly worse. Under Article 13, YouTube would be crazy to give anyone even the benefit of the doubt if they receive a copyright claim. Not only that, it would be effectively required to not just block all of these works, but to prevent many of them from ever being uploaded in the first place.

What the various people pushing for Article 13 don't seem to realize is that bogus copyright claims happen all the time. Or there are mixups around content that multiple people license. Or there are multiple middle men making claims on behalf of copyright holders with no knowledge of who has licensed and who has not. Article 13 doesn't take any of that into account. It just says "license everything." Of course, the big labels/studios don't give a fuck if this leads to censorship of you piddly little independents and amateurs. They just want YouTube to hand them a giant check to "license" their entire catalog. That's the real endgame here. That it would block out independents and amateurs (i.e., competitors) is just icing on the cake. And, of course, it ignores that if YouTube spent $100 million on this system and it already has so many problems, just imagine how poorly everyone else's mandatory filters will work.

Article 13 is a horrible solution to a "problem" that doesn't even exist. The fact that YouTube's $100 million ContentID system is so full of bogus claims shows just one of the many problems with filters — and making them mandatory won't suddenly make YouTube pay. The whole thing is just designed to be leverage. The labels and studios want to use Article 13 as a weapon against YouTube, basically saying "give us all your money in a giant license or we'll sue you over and over and over again." And, of course, should they actually get that, the money is unlikely to make its way back to any of the actual artists.

Europe is doing a big thing badly, and Article 13 is an unmitigated disaster.