Nielsen Music has released it 2018 Year-End Highlights. The survey shows a year of significant overall industry growth, with total album equivalent audio consumption up 23% over 2017, driven by a 49% increase in on-demand audio song streams compared to 2017.

A similar analysis of 2018 stats by BuzzAngle Music saw a 42% increase in on-demand audio streams. 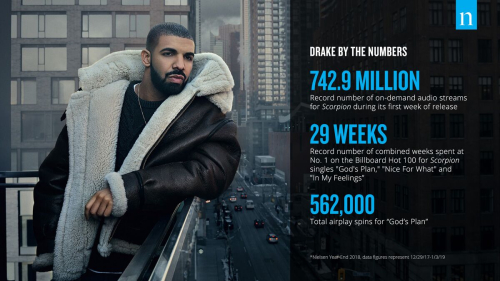 Ed Sheeran’s “Perfect” was the leader in song sales with 1.3 million in permanent downloads so far this year.

The survey includes music consumption for the 12 month period beginning December 29, 2017 through January 3, 2019 (as compared to 12/30/16-1/4/18), as well as consumer trends.  New to this year’s year-end highlights is the integration of Gracenote’s Sonic Style music descriptor system that leverages audio analysis and machine learning technology to classify the “style” of songs at the recording level, helping to better categorize and curate an artist’s entire catalog, beyond traditional artist genres.

"With continued momentum, 2018 has shown no evidence of slowing music consumption with a hearty 49% increase in on-demand audio song streams compared to last year," said David Bakula, SVP Industry Insights at Nielsen Music.  "We can attribute that to increased access to music with new smart speakers and connected devices that have helped catapult engagement and consumption to record highs.  With the anticipation of 5G, we expect that new connected hardware and faster 'always on' connections will continue to drive consumption across all platforms and channels to keep music at the forefront of entertainment in 2019 and beyond."

The year following the release of Luis Fonsi’s “Despacito,” Latin Urban and its crossover with English-language pop and hip-hop, has proven it is here to stay.  In 2018, bilingual hits reached a new threshold with songs like Cardi B, Bad Bunny and J. Balvin’s “I Like It” topping the Billboard Hot 100 in July (over 873 million on-demand streams in 2018) including over 531,000 plays at radio.  The trend continued with crossover hits like DJ Snake, Selena Gomez, Ozuna & Cardi B’s “Taki Taki” (296 million on-demand streams and 87,000 radio plays); and Bad Bunny & Drake’s “MIA” (234 million on-demand streams and 93,000 radio plays), each scoring big with predominantly Spanish-language singles.

Drake’s Scorpion was the blockbuster album to beat in 2018, shattering consumption and chart records.  As the year’s most consumed album, Scorpion shattered records during its first week with its songs earning 742.92 million on-demand audio streams, surpassing record holder Post Malone’s beerbongs & bentleys, which logged 431.3 million on-demand audio streams for its songs in its first week in May.

After a relatively quiet 2017 on the charts, female artists have made a big splash in 2018 thanks to No. 1 hits and wildly popular singles/albums from Cardi B, Camila Cabello and Ariana Grande.  Women have ruled the Billboard Hot 100 as lead or featured artists for 18 weeks in 2018, up from 8 weeks in 2017.

As box office receipts tallied record numbers in 2018, hit movies’ accompanying soundtracks posted some of the biggest showings for the format in recent years.  Even Queen saw a halo effect from the success of its Golden Globe-winning biopicBohemian Rhapsody, which earned the band a historic return to both the Billboard 200 and Billboard Hot 100.  Not only did the soundtrack become the band’s first Top 10 album in 39 years, its namesake single “Bohemian Rhapsody” became one of two songs ever to re-enter the Billboard Hot 100 for a third time in three different decades, at No. 33, with sales of 24,000 downloads and 13.3 million U.S. streams. 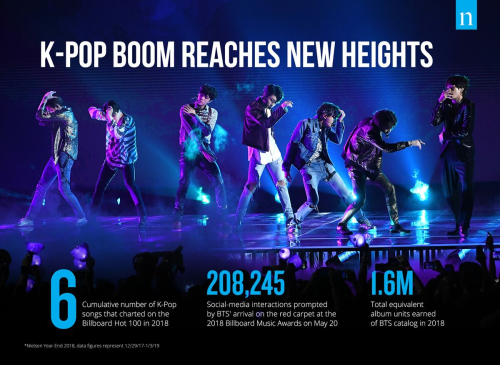 Social-media phenomenon BTS translated their massive online-following to chart success in 2018, with September’s Love Yourself becoming the band’s second album to debut at No. 1 on the Billboard 200 with 185,000 equivalent album units.  But for the first time ever, songs by multiple K-Pop acts achieved success on the Billboard Hot 100 and other charts, suggesting the K-Pop revolution may have only just begun.