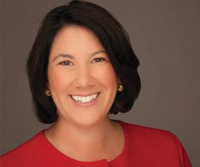 Klasky also  served as deputy assistant secretary for public affairs at the U.S. department of the Treasury, as deputy assistant U.S. trade representative for public affairs, and ran the the office of media affairs at the U.S. department of State.  She began her career on Capitol Hill working for Senators Edward Kennedy and Dennis DeConcini.
"As SoundExchange enters a new stage of growth across the music and publishing industries, Helaine is the perfect fit to help take the company to the next level," said Huppe. "Her broad range of skills and experience at the highest levels of corporate and government arenas will enable SoundExchange to be an even more effective advocate for creators, publishers and the music industry as a whole."
"I look forward to working with colleagues at SoundExchange and throughout the industry as we work together to further simplify the industry and enable creators to do what they do best: transform us with their music and creativity," said Klasky. "As a company that has helped make music accessible to so many, SoundExchange is poised to help further transform the industry. I'm thrilled to be joining that mission."
Bruce Houghton on 01/17/2019 in Music Business | Permalink | Comments (0)
Tags: Helaine S. Klasky, music, music business, musician, musicians, SoundExchange
Share on:
Top
Follow Us on Daily Summary Subscription
Advertise on Hypebot