For all the media attention given to Spotify and Apple Music, YouTube is still the world's most popular music streaming service. But its unique licensing position and massive free offering often has a negative effect on the entire music streaming market.

The Article 13 debate that shaped so much of the latter part of 2018 will continue to play an important role throughout 2019 while European and then national legislators deliberate on the provision and the wider Digital Copyright Directive of which it forms a part. Regular readers will know that MIDiA first highlighted the risk of unintended consequences of Article 13.

Today we present the case for the impact YouTube has on the broader streaming market, driven by the advantages of its unique licensing position. (This is a complex and nuanced topic with compelling evidence on both sides of the debate).

To illustrate YouTube’s impact on the streaming market this post highlights a few of the findings from a new MIDiA report: Music Consumer Behaviour Q3 2018: YouTube Leads the Way But At What Cost? 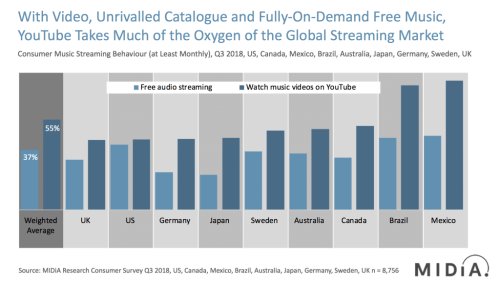 YouTube is the dominant music streaming platform, with 55% of consumers regularly watching music videos on YouTube, compared to a combined 37% for all free audio streaming services. YouTube usage skews young, peaking at nearly three quarters of consumers under 25. Although YouTube leads audio streaming in all markets — even Spotify’s native Sweden — there are some strong regional variations. For example, emerging streaming markets Brazil and Mexico see much higher YouTube penetration, peaking at close to double the level of even traditional music radio in Mexico. Indeed, radio is feeling the YouTube pinch as much as audio streaming. 68% of those under 45 watch YouTube music videos compared to 41% that listen to music radio. The difference increases with younger audiences and the more emerging the market. For example, in Mexico YouTube music penetration is 84% for 20–24 year olds, compared to 37% for music radio. Streaming may be the future of radio, but right now that streaming future is YouTube.

While cause and effect are difficult to untangle, the implied causality here is that YouTube’s unique value proposition steals much of the oxygen from the wider streaming market. Due to its unique licensing position – which Article 13 would likely change, YouTube has more catalogue and fully-on-demand free streaming, not to mention standout product features such as complete music video catalogue and social features such as song comments, likes / dislikes. Services that do not use safe harbour protection (i.e. the vast majority of audio streaming services) do not have these assets and so are at a distinct market disadvantage to YouTube. If you are a consumer in the market for a free streaming service, you have the choice between everything that you want, with complete control or constraints and restrictions, with fewer features. It’s not hard to see why consumers from Mexico through to Sweden make the choice they do. With a free proposition this good (especially when you factor in stream ripper apps and ad blockers), who needs a subscription?

Against this though, must be set two crucial factors:

The final part of the YouTube impact equation is premium conversion. Since appointing Lyor Cohen, YouTube has taken a much more proactive approach to subscriptions, heavily touting its, actually-really-quite-good, YouTube Music premium product. Whether Alphabet’s board is equally exuberant about subscriptions, and whether YouTube Music’s launch lining up with the Article 13 legislative process was coincidental, are both open questions…

But politics and intent aside, YouTube is always going to be far poorer at converting to paid subscriptions because a) its user base is vast, and b) that user base is there for free stuff. So, while 58% of Spotify’s weekly active users (WAUs) are paid, the rate for YouTube Music weekly active usership is in single digit percentage points. That dynamic is not going to change in any meaningful way. In fact, YouTube has a commercial disincentive for pushing subscriptions too hard. It makes its money from advertising, and advertisers pay to reach the best possible consumers. Subscription paywalls lock away your best users, out of the reach of ads, which in turn reduces the value of your inventory to advertisers, which leads to declining revenues. YouTube is not about to swap a large-scale high-margin business for a small-scale low-margin one. Moreover, this issue of advertisers trying to reach paywalled consumers is going become a multi-industry issue in 2019. See my colleague Georgia Meyer’s excellent ‘Marketing to Streaming Subscribers’report for a deep dive on the topic.

Article 13 as a platform for innovation?

The overarching dynamic here is of a leading service that constrains the opportunity for services that are not able to play by the same rules. A levelling of the playing field is needed, but this should not just be legislation (and of course should be careful not to kill music’s ad supported Golden Goose). It should also see labels and publishers finding some common ground between the Spotify and YouTube models, and making those terms available to all parties. Because if YouTube does one thing really well, it shows us how good the streaming music user proposition can be when it is not too tightly constrained by rights holders. Let’s use Article 13 to raise the lowest common denominator, not to bring YouTube down to it.

Streaming music services need a user experience quantum leap in 2019; wouldn’t it be great if Article 13 could be the springboard for transformation and innovation?